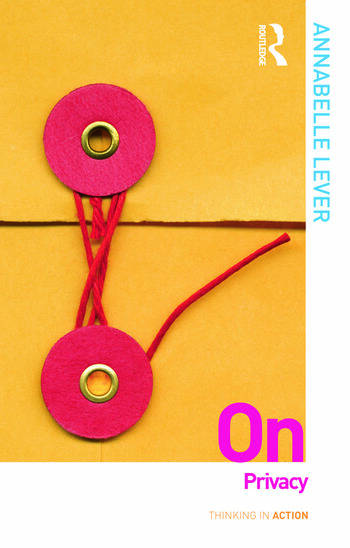 This book explores the Janus-faced features of privacy, and looks at their implications for the control of personal information, for sexual and reproductive freedom, and for democratic politics. It asks what, if anything, is wrong with asking women to get licenses in order to have children, given that pregnancy and childbirth can seriously damage your health.  It considers whether employers should be able to monitor the friendships and financial affairs of employees, and whether we are entitled to know whenever someone rich, famous or powerful has cancer, or an adulterous affair.  It considers whether we are entitled to privacy in public and, if so, what this might mean for the use of CCTV cameras, the treatment of the homeless and the provision of public facilities such as parks, libraries and lavatories.

Above all, the book seeks to understand whether and, if so, why privacy is valuable in a democratic society, and what implications privacy has for the ways we see and treat each other.  The ideas about privacy we have inherited from the past are marked by beliefs about what is desirable, realistic and possible which predate democratic government and, in some cases, predate constitutional government as well. Hence, this book argues, although privacy is an important democratic value, we can only realise that value if we use democratic ideas about the freedom, equality, security and rights of individuals to guide our understanding of privacy.

Annabelle Lever is Associate Professor of Normative Political Theory at the University of Geneva in Switzerland.

"… Lever’s approach is refreshing. First, she sidesteps the controversies over defining privacy, settling for concepts generally associated with privacy: seclusion and solitude, anonymity and confidentiality, intimacy and domesticity. Second, Lever moves beyond the traditional arguments that value privacy because it protects the interests of individuals: what is at stake in protecting privacy is not only individual interests but the democratic nature of modern societies. Whilst the link between privacy and democracy is not novel, it has not been substantiated in the literature; in filling this gap, Lever’s book is of interest to both general readers as well as privacy scholars." - D. Mokrosinska, Ethics and Moral Practice

"Privacy is highly valuable, but why? Annabelle Lever’s On Privacy sheds new light on a most important topic that addresses various issues convincingly and in an accessible way. I have profited greatly and believe this book will become the standard text for years to come." – Thom Brooks, Durham University, UK

"The question of the nature and extent of the right to privacy is one of the central issues of the age.  In this highly readable and enjoyable account Annabelle Lever explores the meaning of privacy, and its complex relation to democratic politics.  Lever has made a fine contribution to our understanding of privacy in democratic societies, exploring not only the value of privacy but also its cost." – Jonathan Wolff, University College London, UK

"Lever’s delightfully accessible book engages the reader in a probing conversation about the meaning and value of privacy.  Cutting through the technical and complicated legal and philosophical treatments of the concept, Lever brings out the central importance of privacy to democracy. Privacy respects people’s equal freedom to make important life choices without having to seek others’ approval: choices about intimacy, work, creative pursuits, domestic life, and moral and political commitments. Whether you’re a student, a specialist, or simply a citizen, this book will give you a new angle – a democratic one – from which to understand a familiar but troublesome idea." – Melissa Williams, University of Toronto, Canada

“In a large and still growing amount of publications on privacy it is sometimes difficult to get a clear grasp of all the issues at stake. On Privacy structures many layers of the debate in an accessible form…the book enables the reader to refine his or her thoughts about privacy, including its definition, by giving a broad picture of the issues involved. With her elaborate discussions, Annabelle Lever illuminates the different facets of privacy, making her book a stimulating insight into the complexity of this contemporary puzzle.”  -Marc-Andre Weber, University of Neuchatel, Switzerland