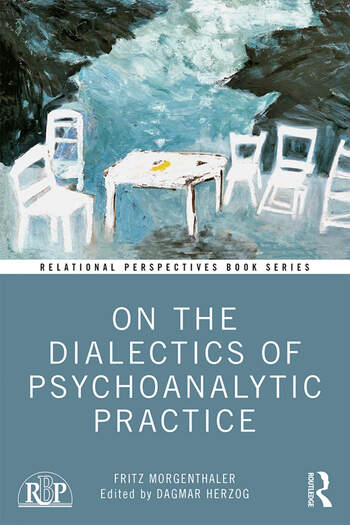 Fritz Morgenthaler was a crucial figure in the return of psychoanalysis to post-Nazi Central Europe. An inspiring clinician and teacher to the New Left generation of 1968, he was the first European psychoanalyst since Freud to declare that homosexuality is not, indeed never, a pathology, and in Technik, developed revolutionary ideas for transforming clinical technique. On the Dialectics of Psychoanalytic Practice offers the first publication in English of this psychoanalytic, counterculture classic.

Those who first picked up Technik encountered it at a historical moment when Marxist psychoanalyst Wilhelm Reich, popular New Left cultural critic Klaus Theweleit, and the texts of the Frankfurt School were already required reading. While not a political text in the same direct way, Morgenthaler’s Technik nonetheless shared many of their preoccupations and conclusions about human nature. It was read as technical guidance for psychoanalysts, but also as a manifesto dedicated to the problem of how it might be possible genuinely to live a postfascist, and nonfascist, existence. Morgenthaler was a protorelationalist who recombined the traditions of ego and self psychology as he retained a commitment to drive theory. Here Dagmar Herzog makes his work available to a new generation of analysts, providing essential source material, annotations, and groundbreaking analysis of the continued importance of the work for historians and therapeutic practitioners alike.

will interest practicing clinicians as well as intellectual historians and cultural studies scholars seeking to understand the return of psychoanalysis to post-Nazi Central Europe.

Part I Technik:  1. Theory of Technique and Analytic Process  2. Sequentiality in the Course of Associations  3. Setting Priorities—and Relativizing Them  4. The Actualization of the Transference-Conflict  5. Identification  6. The Transference-Resistance  7. The Dynamic of Contradictions in the Interpretive Process   8. The Working-Through of a Transference-Resistance  9. Function and Structure of Reconstructive Interpretation  10. Many Paths Lead to No Destination  Part II Supplementary Material:  1. Review of Heinz Kohut, The Analysis of the Self: A Systematic Approach to the Psychoanalytic Treatment of Narcissistic Personality Disorders  2. Letter to Heinz Kohut, September 25, 1977  3. Modes of Interaction in Perversions and Perversion of Modes of Interaction

Fritz Morgenthaler (1919–1984) was a prominent Swiss physician, psychoanalyst, ethnologist, and painter. Cofounder of the interdisciplinary field of ethnopsychoanalysis, his writings on clinical practice, sexuality, and dream interpretation were essential reading for the counterculture and New Left in Continental Europe.

is Distinguished Professor of History at the Graduate Center, City University of New York. She is the author, most recently, of Cold War Freud: Psychoanalysis in an Age of Catastrophes (2017) and Unlearning Eugenics: Sexuality, Reproduction, and Disability in Post-Nazi Europe (2018).

"Arriving when new psychoanalytic concerns – narcissism, borderline – were dislodging the hegemony of American ego psychology, but equally consonant with emergent gay, decolonial, and counter-cultural critique, Morgenthaler’s deftly subversive clinical lectures for psychoanalysts in Zurich in 1974 create extraordinary space for cultural leverage, now as then. Here is an eye for the needs of outsiders, a psychoanalysis without fixed goals, relational before its time, seeking above all to set an emotional process in motion, one which might, through ‘revolutionary psychic turbulence’, foster changes that could make all the difference. As Dagmar Herzog puts it, this is not just a tool for psychoanalytic learning, but a manifesto for nonfascist existence."

"The psychoanalytic contributions of Fritz Morgenthaler, widely admired and idealized in Europe, are mostly unknown in the US. Notably, he was a pioneering contributor to rethinking psychoanalysis’ pathologization of same-sex feelings, behaviors and relationships. This new edited translation of Morgenthaler’s lectures on psychoanalytic technique is compelling and accessible. On the Dialectics of Psychoanalytic Practice should prove a valuable read to historians, students and seasoned practitioners of psychoanalysis."

"Fritz Morgenthaler’s work is a call for the continued relevance of psychoanalysis to understand not only the self, but also broader social and political phenomena. These lectures and supplemental texts will be essential to anyone interested in the potential of psychoanalysis to offer a systematic critique of social normativity (especially in the domain of sexuality)."

– CAMILLE ROBCIS, author of The Law of Kinship: Anthropology, Psychoanalysis, and the Law in France