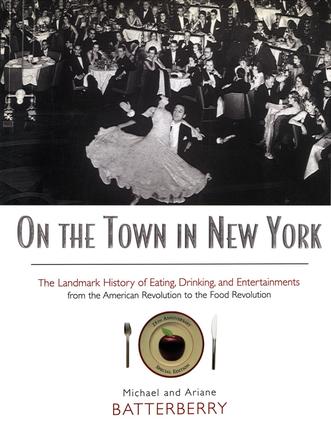 On the Town in New York

The Landmark History of Eating, Drinking, and Entertainments from the American Revolution to the Food Revolution, 2nd Edition

First Published in 1998. Routledge is an imprint of Taylor & Francis, an informa company.

"Newcomers to the title will relish the detailed survey of New York history and food culture." -- The Midwest Book Review

"…a rich stew of American history, both savory and social. There is no other work like it…this 25th anniversary edition is sure to remain a definitive account well into the next millennium." -- Market Watch

"If you relish social history mixed with eating, drinking, and gossip tossed in, On the Town in New York, is a feast." -- Sheldon Landwehr

"A stylish new history of the city's favorite pastime, On the Town in New York, puts the myth before the menu. Its authors, Michael and Ariane Batterberry, lard their assured, breezy, three century narrative with rich vignettes of famo us feasters, from Washington Irving to Salvador Dali." -- The New Yorker

"…for those who want to know how the Astor's entertained or what it was like to dine at the original Delmonico's, [On the Town in New York] is a must." -- Florence Fabricant, The New York Times

"Every revolution creates its chroniclers, its trumpeters, and its critics of the new order. The chroniclers of the modern American food revolution are Michael and Ariane Batterberry, and now their classic book, On the Town in New York, is being reissued with their updated commentary. This is good news for all who like to eat, drink, and read about it." -- Gay Talese

"Scholarly, well-written, and extremely informative, On the Town in New York, by Michael and Ariane Batterberry, will appeal to anyone interested in food and food history. Newly updated, this book has even more relevance today than when it was originally published in 1973." -- Jacques Pepin

"This 'Blue Plate Special' delivers the great taste memories of New York City's food history. It's a beautifully organized menu from all around the town filled with the poetry of the sidewalks of New York." -- Joe Baum of The Rainbow Room

"…great fun, and an invaluable reference book." -- James Beard on the first edition

"The best book ever written on the subject." -- Craig Claiborne on the first edition

Michael and Ariane Batterberry are Founding Editors and Associate Publishers of Food Arts Magazine. They are the authors of numerous books, including Mirror, Mirror: A Social History of Fashion and many titles in the Discovering Art series.