Ontology and Economics
Tony Lawson and His Critics 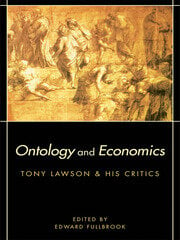 Ontology and Economics: Tony Lawson and His Critics

This original book brings together some of the world's leading critics of economics orthodoxy to debate Lawson's contribution to the economics literature. The debate centres on ontology, which means enquiry into the nature of what exists, and in this collection scholars such as Bruce Caldwell, John Davis and Geoffrey Hodgson present their thoughtful criticisms of Lawson's work while Lawson himself presents his reactions. Of course many social scientists disagree with him, but Lawson’s arguments are so powerful that few economists now feel that his case can be ignored. Bringing Lawson head-to-head with eleven of his most capable critics, this is a book of intellectual drama. More than that, it is a collection of fine minds interacting with each other and being changed by the process.

This book is particularly useful for students and researchers concerned primarily with methodology and future development of economics. It is also relevant to the concerns of philosophers of science and to all social scientists interested in methodological issues.

Edward Fullbrook is the founder and editor of the Real-World Economics Review and a research fellow in the School of Economics at the University of the West of England.

"Tony Lawson is famous for being the most powerful and effective critic of mainstream economics. His criticism is made more effective by the fact that he has an alternative conception of economics and indeed the rest of the social sciences, a conception deriving from his ontological theorising. This volume gives eleven important writers from a variety of fields and points of view within economics a chance to appraise Lawson's work; and with his replies the reader gets a deeper sense of Lawson's point of view and achievement."

"Over the past 15 years, Tony Lawson's prosecution of a programme to establish a field of social ontology has inspired leading post-positivist economists to think anew about the ends, means, and possibilities of economics as a social science. Much constructive dialogue and debate has been generated and Ontology and Economics chronicles and extends these probing dialogues. Lawson's fans and critics, and first-timers looking for a colourful snapshot of the realist movement in contemporary economics, will find this an immensely rewarding read."

"This collection of essays between Tony Lawson and his critics is an important contribution to the ongoing critical discourse on ontology, realism and heterodox economics. While the critics do have their say, Lawson's responses convincingly demonstrate that his project in social ontology not only makes a significant contribution to heterodox economics but also is indispensable for its future development."