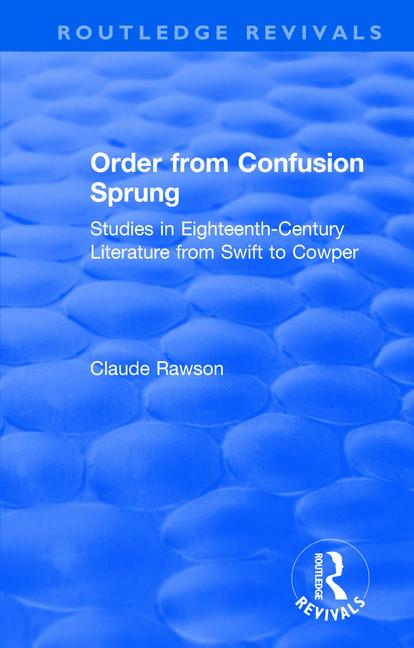 Studies in Eighteenth-Century Literature from Swift to Cowper, 1st Edition

Originally published in 1985, Order From Confusion Sprung brings together some of Claude Rawson's more important essays and articles on eighteenth-century subjects, most belong to the last decade or so, but a few earlier pieces have also been included. Swift, Pope and Fielding are extensively treated, and there are discussions of Johnson, Boswell, Cowper, as well as some authors of the so-called Sentimental School. The volume also contains reappraisals of the concepts underlying such terms as 'neo-classic' and 'Augustan' in their application to eighteenth-century literature, and comments forthrightly on prevailing trends in the academic study of the subject in the last two decades.

1. The Characters of Swift’s Satire: Reflections on Swift, Johnson, and Human Restlessness

2. Gulliver’s Travels and Some Modern Fictions

3. A Reading of A Modest Proposal

9. Dialogue and Authorial Presence in Fielding’s Novels and Plays

10. A Journal From This World to the Next

15. More Providence than Wit: Some Recent Approaches to Eighteenth-Century Literature