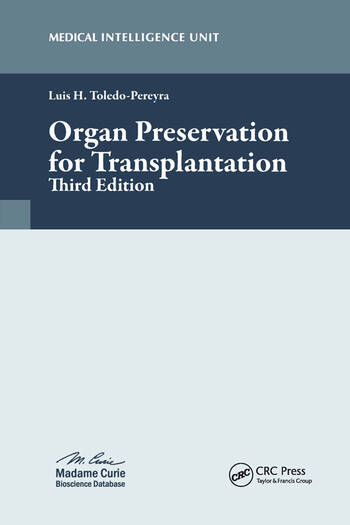 The first edition of this book, Basic Concepts in Organ Procurement, Perfusion and Preservation for Transplantation, was published 27 years ago, in 1982 when organ procurement and preservation began to advance in the study of the best ways to preserve organs for transplantation. The second edition, Organ Procurement and Preservation for Transplantation, 2nd Edition, followed 15 years later, in 1997, with the goal of finding common denominators in the best preservation techniques for transplantation. In this current third edition, 11 years after the second edition, similar goals are still pursued of defining the best preservation methods, but there is now more evidence, including results, and new advances have reached publication and are being incorporated into ischemia and reperfusion techniques and organ preservation studies. Many preservation solutions have been introduced, important preservation solution components have been better defined, and improved perfusion methods are being considered, especially for the increasing number of organ donors with non-beating hearts who are being sought for transplantation. This edition (2009) engaged experts in the field of organ preservation to review, update, and rewrite each of the chapters. Crafted in collaboration with Luis H. Toledo-Pereyra, the text is eminently informative and easily understandable. Each solid organ that can be transplanted has an entire chapter devoted to the particular methods of its preservation. One chapter apiece, in other words, features insights on the preservation of the kidney, the liver, the pancreas, the small bowel, the heart, and the heart-lung. The title of the present book has been shortened to better represent its content. Thus, Organ Preservation for Transplantation, 3rd Edition, demonstrates a more accurate depiction of its current status. Nevertheless, the goal of this book remains exactly the same as in the first edition, that is “to analyze the most important aspects of organ procurement, perfusion and preservation for transplantation”.