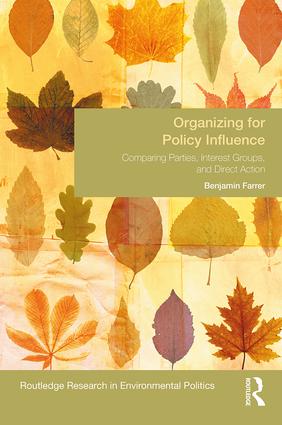 In this book, Benjamin Farrer explains how activists can influence the policies they care about, even when they are outnumbered and their issues are ignored. The solution lies in a surprising place: organizational choice. Different types of organizations will be more influential under particular democratic institutions. If they choose the optimal type of organization - given their institutional context - then even minority groups can be influential. Environmentalists are a key example of how small groups can sometimes punch above their weight. Environmentalists in different countries have made different organizational choices. These choices explain whether or not they succeeded in influencing policy. In the empirical chapters that follow, Farrer shows that environmentalists can sometimes be more influential if they form interest groups, but under other institutions, political parties are the optimal organizational choice. Although interest groups are often easier to create, national institutions can sometimes insulate mainstream politicians from niche interest groups. When institutions deny access to interest groups, activists are forced to send the stronger signal of party entry.

Using a variety of methods, including a formal model, an experiment, and a wealth of empirical data from a variety of settings, Farrer proves that this theory of organizational choice adds to our understanding of several crucial phenomena. First, it helps explain patterns of political participation, by showing the importance of instrumental, rather than purely expressive, motivations for activism. Second, it provides an important modification to Duverger’s (1954) law, by showing that new party entry is a function not only of electoral rules but also of the rules that govern interest groups. Third, it extends research on the role of institutions in determining policy outputs, by showing that policy outcomes are a function of the interaction between organizational choices and institutional context.

'Organizing for Policy Influence provides an innovative theory and a careful empirical analysis for understanding how activist groups influence politics in advanced democracies. Farrer persuasively argues that the type of organization that groups of political activists choose – specifically, whether they choose political parties, interest groups, or direct action groups – has profound implications for how these groups of citizens are represented. He looks at current and salient issues, like the environment and immigration, to increase our understanding of activist influence. Under which circumstances should activists organize as interest groups or political parties? Farrer’s analysis provides key insights for important questions like this one.' - Lawrence Ezrow, Professor of Government, University of Essex

'Farrer employs an impressive variety of methodological approaches to argue that overlooked and under-represented actors – specifically, environmental activists – have the power to effect policy change.  An important corrective to the academic and popular bias in favor of political parties, this book also shows why policy-seeking activists might choose to form an interest group or engage in direct action over creating a niche party.' - Bonnie M. Meguid, Associate Professor of Political Science, University of Rochester

'Organizing for Policy Influence represents an expansive, insightful, and engaging text that is both theoretically sophisticated and methodologically rigorous.Farrer’s theory usefully problematizes orthodox determinism in social and political analyses and should be read by any scholar in these areas.' - Adam Howe University of British Columbia

2. The Possibilities of Political Organizations

3. The Effect of Institutions on Organizational Choice

Benjamin Farrer is an assistant professor in the Environmental Studies Department at Knox College. His main research and teaching interests are in the field of parties and interest groups.

Over recent years environmental politics has moved from a peripheral interest to a central concern within the discipline of politics. This series aims to reinforce this trend through the publication of books that investigate the nature of contemporary environmental politics and show the centrality of environmental politics to the study of politics per se. The series understands politics in a broad sense and books will focus on mainstream issues such as the policy process and new social movements as well as emerging areas such as cultural politics and political economy. Books in the series will analyse contemporary political practices with regards to the environment and/or explore possible future directions for the ‘greening’ of contemporary politics. The series will be of interest not only to academics and students working in the environmental field, but will also demand to be read within the broader discipline.

The series consists of two strands:

addresses the needs of students and teachers, and the titles are published in paperback and hardback.