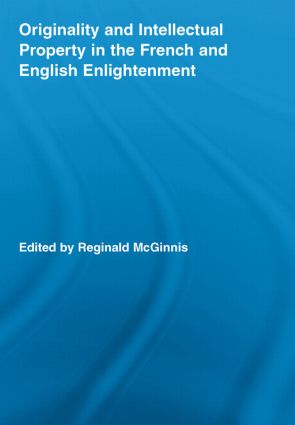 Originality and Intellectual Property in the French and English Enlightenment

Are legal concepts of intellectual property and copyright related to artistic notions of invention and originality? Do literary and legal scholars have anything to learn from each other, or should the legal debate be viewed as separate from questions of aesthetics? Bridging what are usually perceived as two distinct areas of inquiry, this interdisciplinary volume begins with a reflection on the "origins" of literary and legal questions in the Enlightenment to consider their ramifications in the post-Enlightenment and contemporary world. Tying in to the growing scholarly interest in connections between law and literature, on the one hand, and to the contemporary interrogation of "originality" and "authorship," on the other hand, the present volume furthers research in the field by providing a dense study of the legal and historical context to re-examine our current assumptions about supposed earlier Enlightenment and Romantic ideals of individual authorship and originality.

"The range of authors, artists, and works addressed in these essays remains genuinely impressive. I feel compelled from the outset to underscore the extent to which there seems very often to be—in almost all of these essays—substantially more going on than perhaps first meets the eye." --Robert L. Mack, Eighteenth-Century Fiction

Cristina S. Martinez, Law, University of Ottawa. Thomas Gainsborough: The Eloquence and Idiosyncrasy of the Brush

Reginald McGinnis is Associate Professor of French at the University of Arizona. His publications include a book on Baudelaire, La Prostitution sacrée (Paris: Belin, 1994), as well as articles in Studies in Eighteenth-Century Culture, l’Atelier du roman, PO&SIE, Cahiers de l’Herne and the Romanic Review.