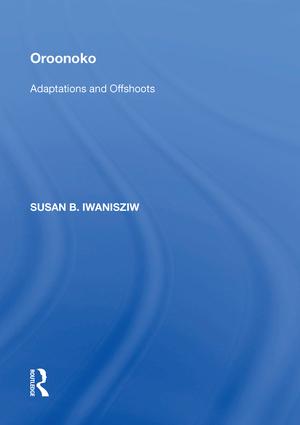 With the aim of examining the postcolonial applications of Aphra Behn's re-entry into the literary canon, the editor presents this edition as a collection representing the nexus of very specific articulations of literary, cultural, and political tropes produced by various writers and adapters from 1695 through 1999. The volume begins with a general introduction. It then presents seven 18th-century versions of the play and one poem, ending with 'Biyi Bandele's late 20th-century drama. All texts are supplemented by original paratextual commentary, if that is known, and prefaced by a brief editorial commentary setting out pertinent biographical, bibliographical, theatrical, and historical context not covered in the general introduction. The tradition of stage adaptations of Oroonoko, most of them keyed to Southerne's drama rather than to Behn's initial novella, clearly shows the responsiveness of this series to studies of authorship, gender, genre and theatricality, class, race, and, especially, the British response to the Atlantic slave trade, and, thus, to the enduring relevance of these plays in modern literary and historical scholarship.

Contents: Introduction; Oroonoko, A Tragedy, Thomas Southerne; The Sexes Mis-Match'd, anonymous; Oroonoko, A Tragedy as it is now Acted at the Theatre-Royal, Drury Lane, John Hawkesworth; Excerpts from Oroonoko: or the Royal Slave, A Tragedy, Francis Gentleman; Excerpts from Oroonoko, A Tragedy Altered from the Original Play of that Name, Written by the late Thomas Southern, Esq., anonymous; The Prince of Angola, John Ferriar; Slavery, A Poem, Hannah More; The Benevolent Planters, Thomas Bellamy; Aphra Behn's Oroonoko in a new adaptation by 'Biyi Bandele, 'Biyi Bandele; Selected bibliography.