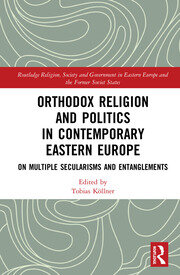 Orthodox Religion and Politics in Contemporary Eastern Europe: On Multiple Secularisms and Entanglements

1. Introduction – On Multiple Secularisms and Entanglements: Orthodox Religion and Politics in contemporary Eastern Europe and Beyond - Tobias Köllner

2. Symphonia and the Historical Relationship between State and Church: Legacies from Byzantine Times until Today - Daniel Jianu

3. ‘Proud to be Orthodox’: Religion and Politics during the 2014 presidential elections in Romania - Lucian Cîrlan

4. The Temple Mount Comparison – A new Paradigm of the Relationship between State and Church? - Marten Stahlberg

5. A Resilient Harmony, or How the Politics of Social Inequality in Post-Soviet Russian Society Have Informed Orthodox Parish Life - Detelina Tocheva

7. The Shifts Between: Multiple Secularisms, Multiple Modernities and the Post-Soviet School - Agata Ładykowska

10. Between Europeanisation and the Russian-Georgian Brotherhood: Nationalism, Orthodoxy, and Geopolitics of the Georgian Church - Nutsa Batiashvili

11. The End of the Pro-Orthodox Consensus: Religion as a New Cleavage in Russian Society - Dmitry Uzlaner

13. Surrendering to Public Pressure: The ‘Macedonian Orthodox Church’ and the Rejection of the Niš Agreement in 2002  - Nenad Živković

Tobias Köllner is assistant professor at the Witten/Herdecke University and board member in the Centre for Research on Transformation at Otto von Guericke University, Magdeburg, Germany