Orthodoxy, Paganism and Dissent in the Early Christian Centuries 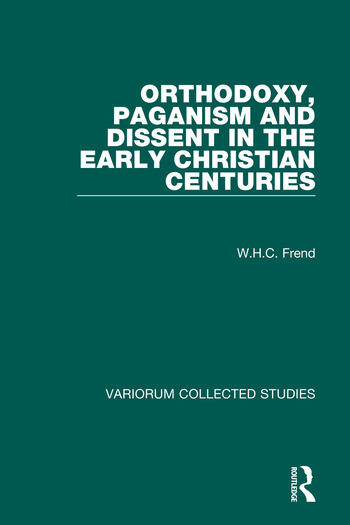 Orthodoxy, Paganism and Dissent in the Early Christian Centuries

This latest collection of articles by Professor Frend brings together a further set of his papers on the history and archaeology of the Early Church. Eight of these relate to St Augustine and his times, and deal with the politics and thought of the Catholic and Donatist Churches in North Africa. Other groups are concerned with martyrs, and in particular the cult of martyrs in Byzantine North Africa and in Nubia, and with the reasons for the relative failure of Christianity in Roman Britain, while the final essay is devoted to the greatest of historians of Late Antiquity, Edward Gibbon, and his views on early Christianity.

Contents: Introduction; The Church in the reign of Constantius II (337-361): mission-monasticism-worship; Pagans, Christians and 'the Barbarian conspiracy' of A.D. 367 in Roman Britain; Altare subnixus: a cult of relics in the Romano-British Church?; Martyrdom and political oppression; Martyrdom in East and West: the saga of St George of Nobatia and England; Fragments of a version of the Acta S. Georgii from Q'asr Ibrim; St Ambrose and other churches (except Rome); Donatist and Catholic: the organisation of Christian communities in the North African countryside; The Donatist church and St Paul; Donatus 'paene totam Africam decepit'. How?; Pythagoreanism and Hermetism in Augustine's 'hidden years'; Augustine and state authority: the example of the Donatists; Augustine's reactions to the barbarian invasions of the West, 407-417: some comparisons with his Western contemporaries; A new eyewitness of the barbarian impact on Spain, 409-419; Augustine and Orosius: on the end of the ancient world; The fall of Macedonius in 511 - a suggestion; North African and Byzantine saints in Byzantine North Africa; Edward Gibbon (1737-1794) and early Christianity; Index.