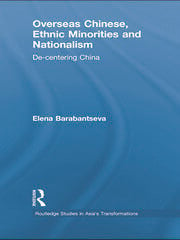 Elena Barabantseva looks at the close relationship between state-led nationalism and modernisation, with specific reference to discourses on the overseas Chinese and minority nationalities. The interplay between modernisation programmes and nationalist discourses has shaped China’s national project, whose membership criteria have evolved historically. By looking specifically at the ascribed roles of China’s ethnic minorities and overseas Chinese in successive state-led modernisation efforts,

This book offers new perspectives on the changing boundaries of the Chinese nation. It places domestic nation-building and transnational identity politics in a single analytical framework, and examines how they interact to frame the national project of the Chinese state. By exploring the processes taking place at the ethnic and territorial margins of the Chinese nation-state, the author provides a new perspective on China’s national modernisation project, clarifying the processes occurring across national boundaries and illustrating how China has negotiated the basis for belonging to its national project under the challenge to modernise amid both domestic and global transformations.

This book will be of interest to students and scholars of Asian politics, Chinese politics, nationalism, transnationalism and regionalism.

Elena Barabantseva is a Research Fellow and Lecturer in Chinese Politics, University of Manchester, UK.

'Elena Barabantseva's fascinating book changes the way we think about identity and politics in China. By examining how groups at the margins - overseas Chinese and ethnic minorities - are invoked in Beijing's nation-building and state-building policies, she shows how nationalism and modernization take shape in China. The book is important beyond Chinese studies: by treating nationalism, modernization, overseas Chinese and ethnic minorities as contingent concepts - rather than stable entities - it challenges the view that globalization undermines the nation-state by showing how subnational, national and transnational groups can also support each other in various ways.'

William A Callahan, Professor of International Politics and China Studies, University of Manchester

‘To anyone who wants to understand just what China is and is not as a nation, I would recommend turning first to Elena Barabantseva's De-Centering China. In clear language and with a fine feel for nuance, Barabantseva shows just how complex are the ideology and the policies of Chinese nationalism. Through examining the ways that successive regimes have tried to include the problematic peripheries of Chineseness - Han Chinese living outside China and non-Han living within China - Barabantseva gives us the clearest explanation yet of what the Chinese state would like people to think China is, and of the contradictions inherent in this view of the relationship between state, territory, race, and nation.’

'Chinese nationalism became such a potent political force during the last half century that the relative novelty of its construction is largely overlooked. The overseas Chinese and the country's other ethnic groups counter-intuitively play a central role in that process, as Elena Barabantseva demonstrates. A book that will be of interest to all those concerned with the impact of Chinese nationalism, as well as the dynamics of its construction.'

'[A]n absorbing account of the processes by which Chinese identity, or Chineseness, extends beyond intra-national and inter-state borders through the manipulation of flexible concepts along ever-changing contours...  The rich use of primary sources in Chinese is another plus in this work... readers will appreciate the flowing and precise language, devoid of extraneous jargon.'