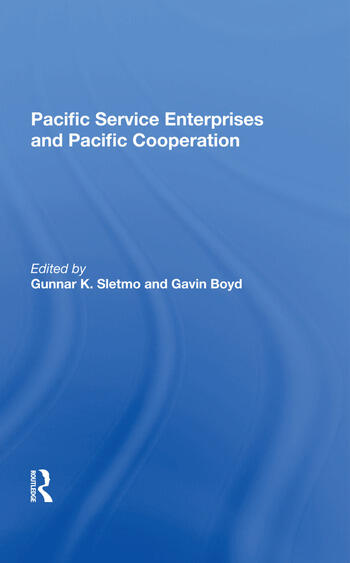 "This book is the result of a team effort that has brought together researchers from Europe, Japan and North America. Their backgrounds and experience reflect the interdisciplinary scope of the book, which covers economic, political and business aspects of service enterprises and cooperation in the Pacific-Asia region. The idea for this project originated with Gavin Boyd, who approached l'Ecole des Hautes Etudes Commerciales (HEC) in 1990 in order to explore possible avenues of cooperation. HEC's Center for International Business Studies (CETAI), which has a long-standing interest in Asia, agreed to support the project, and the newly created Orner DeSerres Chair of Commerce, also at HEC, accepted to coordinate the project and to provide technical support. Gavin Boyd, Associate Member of CET AI, and Gunnar K. Sletmo, Orner DeSerres Professor of Commerce and Member of CETAI, agreed to serve as coeditors for the book."

Gunnar K. Sletmo is Omer DeSerres Professor of Commerce at l’École des Hautes Études Commerciales, Montreal. He has academic degrees from the University of Oslo, the Norwegian School of Economics and Business Administration, and the Graduate School of Business, Columbia University. Professor Sletmo has held academic appointments in economics, distribution and transportation at the Norwegian School of Economics and Business Administration (1960–67) and the Graduate School of Business, Columbia University (1969–77). He has been at HEC since 1977, where he was appointed to the Omer DeSerres Chair of Commerce in 1989. He has held visiting professorships at the London School of Economics, Maritime College (SUNY), the University of Cape Town, and the University of Tianjin, People’s Republic of China. He was Chairman of the Federal Task Force on Deep-Sea Shipping Canada (1984–85) and has been consultant to business and governments in Asia, North America and Europe. He authored Conferences in the Container Age — U.S. Policy at Sea (with Ernest W. Williams, Jr.) with a foreword by Karl E. Bakke, former Chairman of the U.S. Federal Maritime Commission, and he has published extensively on distribution, trade and transport. He has served as consultant to a number of international organizations, government agencies large corporations. Since 1985, he has worked regularly in China on projects related to management education, infrastructure investment and the open cities program. Gavin Boyd is a Research Associate at the Centre for International Business Studies (CETAI), l’École des Hautes Études Commerciales, affiliated with the University of Montreal, and Honorary Professor, Political Science Department, Rutgers University, Newark, New Jersey, where he was a Visiting Professor for the 1989–90 academic year, after retiring from Saint Mary’s University, Halifax, Nova Scotia. Previously he had held visiting professorships, during sabbaticals, at the University of Louisville, Arizona State University and the State University of New York, Brockport. During the 1970s and 1980s he was a consultant to the Defence Department, Ottawa, on projects relating to Pacific security. He is now working on a project relating to Canada’s foreign economic policy for the Department of External Affairs, Ottawa. In the 1950s and 1960s he held research posts in the Australian Defence Department, the Southeast Asian Treaty Organization, and the Department of International Relations at the Australian National University. His current research interests cover regional integration in the Pacific, global economic organizations, political change, and advanced political development. His recent books include Corporate Planning and Policy Planning in the Pacific (1993); Structuring International Economic Cooperation (1991); and Pacific Trade, Investment, and Politics (1987).