Palestinians in Jerusalem and Jaffa, 1948
A Tale of Two Cities 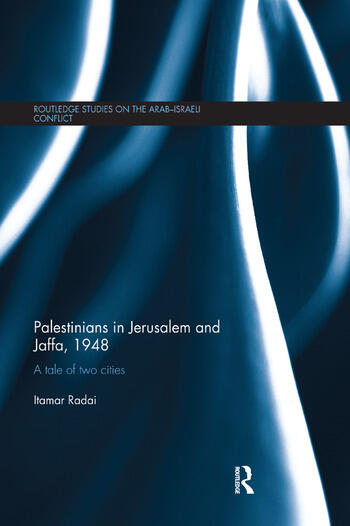 Palestinians in Jerusalem and Jaffa, 1948: A Tale of Two Cities

Between November 1947 and May 1948 war between the Palestinian Arab community and the Jewish community encompassed Palestine, with Jerusalem and Jaffa becoming focal points in the conflict due to their centrality, size and symbolic importance.

Palestinians in Jerusalem and Jaffa, 1948

examines Palestinian Arab society, institutions, and fighters in Jerusalem and Jaffa during the conflict. It is one of the first books in English that deals with the Palestinian Arabs at this crucial and tragic moment in their history, with extensive use of Arabic sources and an inquiry from the Palestinian vantage point. It examines the causes of the social collapse of the Palestinian Arab communities in Jerusalem and Jaffa during the 1948 inter-communal war, and the impact of this collapse on the military defeat. This book reveals that the most important internal factors to the Palestinian defeat were the social changes that took place in Arab society during the British Mandate, namely internal migration from rural areas to the cities, the shift from agriculture to wage labour, and the rise of the urban middle class. By looking beyond the well-established external factors, this study uncovers how modernity led to a breakdown within Palestinian Arab society, widening social fissures without producing effective institutions, and thus alienating social classes both from each other and from the leadership.

With careful examination of a range of sources and informed analysis of Palestinian social history, Palestinians in Jerusalem and Jaffa, 1948 is a key resource for students and scholars interested in the modern Middle East, Palestinian Studies, the Arab-Israeli conflict and Israel Studies.

Introduction Part One: Jerusalem: The Battle for the Holy City Chapter 1: Jerusalem at War Chapter 2: The Collapse of the Middle Class - The Case of Qatamon Chapter 3: Jerusalem Resists Part Two: Jaffa: The Bride of the Sea in Distress Chapter 4: Jaffa on the Eve of the War Chapter 5: Jaffa as a Battlefield Chapter 6: The Fall of Jaffa Conclusion

Itamar Radai is academic director of the Konrad Adenauer Program for Jewish-Arab Cooperation and a research fellow at the Moshe Dayan Center for Middle Eastern and African Studies, Tel Aviv University.

"A new and pioneering work sheds light on these similar, yet different cities... a thorough, in-depth study of Palestinian society in an attempt to explain its debacle… a comprehensive picture based on a variety of sources… an account in which the abundance of details does not obscure the view of the general course of events... a rare scholarly achievement, particularly in the highly charged Middle Eastern atmosphere."

"Radai is to be congratulated for his readable, thought provoking, challenging, and sensitive study — one that has been nicely translated from Hebrew by Haim Watzman, and includes good British-made maps of the period to guide readers. It is an interesting, exciting read."

"Dr. Radai’s book is documented by valuable archival material from Israel and England, and also by contemporaneous Arabic and Hebrew press reports, and by about 200 published books in Arabic, Hebrew, and English—some of which are memoirs and eye-witness accounts of the events. All this documentation gives his book credibility as he follows the fighting in Jerusalem and Jaffa from day to day, sometimes from hour to hour, describing its happenings, its heroes and victims, and giving names of commanders and their strategies, and explaining the viewpoints and aims of politicians. His book is a good example of microhistory... this book is useful to all those interested in the Arab-Israeli conflict and in Palestinian studies."