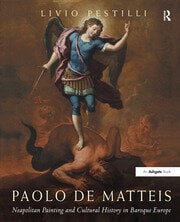 This volume represents a long overdue reassessment of the Neapolitan painter Paolo de Matteis, an artist largely overlooked in English language scholarly publications, but one who merits our attention for the quality of his work and the originality of its iconography, as well as for his remarkable ability to respond creatively to his patrons’ aesthetic ideals and agendas. Following a meticulous examination of the ways in which posterity’s impression of de Matteis has been conditioned by a biased biographical and literary tradition, Livio Pestilli devotes rich, detailed analyses to the artist’s most significant paintings and drawings. More than just a novel approach to de Matteis and the Neapolitan Baroque, however, the book makes a significant contribution to the study and understanding of early eighteenth-century European art and cultural history in general, not only in Naples but in other major European centers, including Paris, Vienna, Genoa, and Rome.

'Livio Pestilli has given us more than a monograph on the second of the two major Neapolitan painters who bridged the seventeenth and eighteenth centuries. He shows that Paolo De Matteis was a figure of European stature who, like his contemporary Francesco Solimena, involved himself in every aspect of contemporary culture. Few art historians can match Pestilli’s knowledge of the literary scene, the international politics, the natural science and classical scholarship of the period. Pestilli manages to give full attention to De Matteis’ professional aspirations, to the subject matter of his paintings, to his pictorial technique and preparatory drawings, while also illuminating the complex historiographical legacy that has long obscured the artist’s reputation.' Thomas Willette, University of Michigan, USA

'This, the first monograph on Paolo de Matteis, an eccentric, erudite and various artist, redeems him from a hostile biographical tradition. Brilliantly re-appraising his subject, Pestilli shows how subtly the artist’s varied styles responded to patronal needs, and re-establishes de Matteis at the centre of all the splendour of the late Neapolitan Baroque.' Helen Langdon, Former Assistant Director, British School at Rome