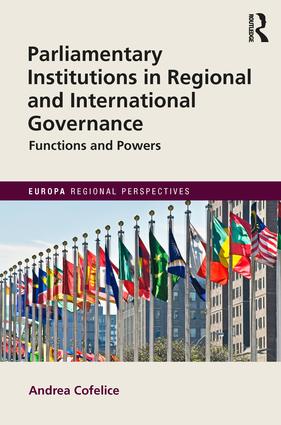 The book is aimed at scholars of global governance, international organization and comparative regionalism, and will also be of interest to parliamentarians and parliamentary practitioners from national and international institutions.

In his book, Andrea Cofelice offers a detailed and thorough investigation which compares 22 parliamentary institutions from European, African and Latin American international regional organizations. He discusses the impact produced on the decision-making processes and the conditions under which such impact is expected to expand. Research on these important aspects of international politics is refreshing and well-needed.

(PhD, University of Siena, Italy, 2015) is a research fellow at the Centre for Studies on Federalism in Turin, Italy. He is a member of the research team on ‘International Democracy Watch’ and an editor of the Italian Yearbook of Human Rights (Peter Lang, 2011-). He has published in several edited books on comparative regionalism and parliamentary diplomacy, and in journals including Italian Political Science Review, European Foreign Affairs Review, Mediterranean Quarterly, and The Hague Journal of Diplomacy.