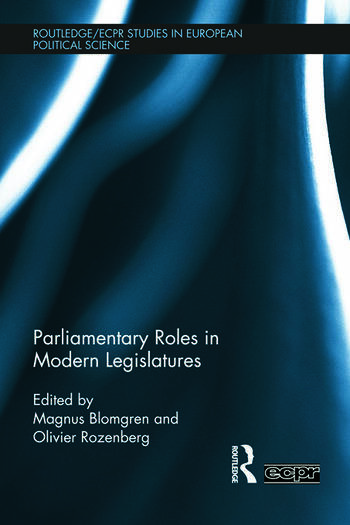 This book gathers the most influential authors on role research and legislative studies to examine the different roles that MPs are playing in modern-day legislatures. It provides a comprehensive and critical overview of current research on legislative roles, summarises previous research, presents a large variety of methodological approaches and also explores the latest developing approaches to role theory.

The concept of political roles has become increasingly relevant for understanding contemporary political systems. Parliamentary, legislative and representative roles are professional roles that provide a way of connecting the individual legislator to their institution that can also explain a legislator’s attitude and behaviour. Drawing upon case studies with as much as 40 years of data that include Germany, the Netherlands, UK, Austria, Hungary, Australia, New Zealand and the European Parliament, this book examines the link between representative roles, different institutional settings and parliamentary behaviour. It argues that the roles MPs play depend of who they think they should represent; between their voters, their party, the people of their country and also themselves, conflicts of loyalty can occur. This book provides a framework to analyse MPs’ choices by searching both the reasons for their views about representation, and the consequences of those views in parliament.

Olivier Rozenberg is Associate Research Professor at Sciences Po (Paris) where he works in the Centre d'études européennes.

Magnus Blomgren is a Senior Lecturer at the Department of Political Science at Umeå University, Sweden.

'The idea that legislators have, and understand themselves to have, many roles was central to early behavioral studies of legislatures, but fell out of favor with recognition that the initial models were overly simplistic. With this volume, Rozenberg, Blomgren and their colleagues return a sophisticated understanding of legislative roles to center stage. The book not only demonstrates the power of the concept of legislative roles in understanding legislative behavior, but also sets an important agenda for the future research.' - Richard Katz, Johns Hopkins University

'Historically, the study of legislative roles has been one of the most productive fields in empirical research on parliaments and legislatures. After great advances during the 1950s and 1960s, the new institutionalism in its sociological variety has contributed to a renewed interest in the role orientations of parliamentarians. Magnus Blomgren and Olivier Rozenberg have assembled a number of very distinguished scholars from Europe and the US to explore the potential of legislative role analysis half a century after its first great advances. The resulting volume is an outstanding and original contribution to the field of legislative studies. Based on very rich empirical material across a large number of countries and the European Parliament, the authors demonstrate that the study of legislative roles is highly relevant to a modern analysis of legislative behavior and offers profound theoretical insights into the motivations and strategies of Members of Parliament.' - Thomas Saalfeld, University of Bamberg

…the editors and contributors have produced a publication of a remarkable quality that advances theory and empirical analysis legislative roles. I'm not sure that trying to reconcile, such as publishers seek to do so, the theories proposed roles respectively Searing and Strøm is essential or even useful (although calls to erase differences between different theoretical schools seem to have become the paradigm dominant in political science). In fact, alternative theoretical proposals, Navarro as does seem more successful than trying to reconcile theories which are based on areas (psychology and economics) and postulates very different. - Sébastien Lazardeux, St. John Fischer College, Rochester (NY)