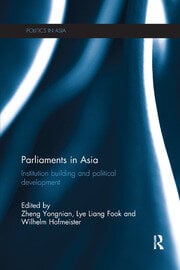 Much writing on politics in Asia revolves around the themes of democracy and democratisation with a particular focus on political systems and political parties. This book, on the other hand, examines the role that parliaments – a key institution of democracy – play in East, Southeast and South Asia including Taiwan and Hong Kong. Parliaments in these locations function in a variety of historical, political and socio-economic circumstances with different implications for institution building and political development. This book examines questions like how accessible, representative, transparent, accountable and effective are parliaments? To what extent are parliaments able to hold other political actors to account or how far are they constrained by the political environment in which they operate? Going further, this book considers how new media such as the Internet and other social platforms, through providing avenues for individuals to articulate their views separate from official channels, are influencing the ways parliaments work. To stay relevant, parliamentarians need to reach out and engage these individuals in formulating, deciding and fine-tuning policies. In the information age, being a parliamentarian has become more challenging and how a parliamentarian copes with this change will shape the nature and pace of political development.

is a Research Fellow at the East Asia Institute, National University of Singapore.

is the Director of the Konrad Adenhauer Foundation’s Political Dialogue with Asia Program, based in Singapore.