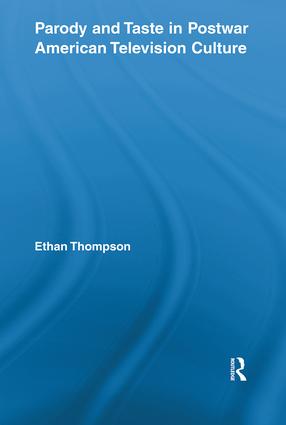 In this original study, Thompson explores the complicated relationships between Americans and television during the 1950s, as seen and effected through popular humor. Parody and Taste in Postwar American Television Culture documents how Americans grew accustomed to understanding politics, current events, and popular culture through comedy that is simultaneously critical, commercial, and funny. Along with the rapid growth of television in the 1950s, an explosion of satire and parody took place across a wide field of American culture—in magazines, comic books, film, comedy albums, and on television itself. Taken together, these case studies don’t just analyze and theorize the production and consumption of parody and television, but force us to revisit and revise our notions of postwar "consensus" culture as well.

"Parody and Taste in Postwar American Television Culture tackles important questions regarding how politics, power, culture, and the subversion of each works. A superb history, and a vital corrective to any who believe that subversion started with Comedy Central." - Jonathan Gray, Professor at University of Wisconsin Madison

"Parody and Taste in Postwar American Television Culture is not only a fascinating critical exploration of some comedic early TV programs starring Shelley Berman, Ernie Kovacs, and Oscar Levant. It is also an impressive engagement with a key moment in the history of taste in popular culture, considering ways in which the culture industry -- not only television broadcasters but also magazines like MAD and Playboy -- produced opportunities for critical engagement with mass media's forms and meanings. This book is an important contribution to early television history, and to studies of post-war American culture."- Michael Newman, Associate Professor at University of Wisconsin Milwaukee

Introduction. The Parodic Impulse in the (Not-So) Fabulous Fifties 1. The New, Sick Sense: The Mediation of America’s Health and Humor at Mid-Century 2. What, Me Subversive? MAD Magazine and the Textual Strategies and Cultural Politics of Parody 3. The Parodic Sensibility and the Sophisticated Gaze: Masculinity and Taste in Playboy’s Penthouse 4. Ernie Kovacs and the Logics of Television Parody and Electronic Trickery 5. Black Tie, Straightjacket: Oscar Levant’s Sick Life on TV Conclusion: Television for People Who Hate Television?

Ethan Thompson (Ph.D., University of Southern California) is Associate Professor of Communication at Texas A&M University – Corpus Christi. He is co-editor of Satire TV: Politics and Comedy in the Post-Network Era.