Party Images in the American Electorate 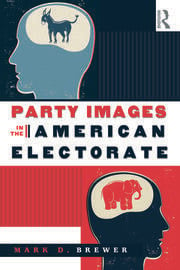 Party Images in the American Electorate

Party affiliation has long been the driving force behind electoral politics in the United States. Despite this fact, scant attention has been devoted to the American electorate’s party images—the "mental pictures" that individuals have about the parties which enable citizens to translate events in the larger political environment into terms meaningful to them as individuals. Party images are central to understanding individuals’ political perceptions and, ultimately, voting behavior.

Party Images in the American Electorate systematically examines the substance, evolution, and manipulation of party images within the American public over the last half century, both within the public as a whole and within important subgroups based on class, race and ethnicity, sex, and religiosity. Ultimately, this important book investigates how these party images are tied into the story of party polarization and how they affect electoral outcomes in the United States.

Mark D. Brewer is Assistant Professor of Political Science at the University of Maine. He is the author of Relevant No More? The Catholic/Protestant Divide in American Electoral Politics; and co-author of Diverging Parties; Split: Class and Cultural Divides in American Politics; and Parties and Elections in America, 5th edition.

"This timely analysis moves beyond the stereotypes and demonstrates that the images Americans have of the two major parties reflect real differences that have changed over time as the parties themselves have changed. How Americans view the two major parties—what they like and dislike—is a primary factor that shapes voter opinion and electoral decisions. Through a careful study of decades of survey research, Brewer traces the party images that have developed over time and demonstrates that substantive differences between the parties, rather than campaign tactics, are at the root of modern elections and the nation's partisan divide."

"Although most Americans bemoan partisanship, the overwhelming number of them are partisans and think and act as partisans. This has only become more true in recent years. In this book, Mark Brewer has done us a great service in digging behind the partisan labels into the content or, at least, perceived content of partisanship–what people think of the parties and the group differences in those perceptions."

"Mark Brewer's Party Images in the American Electorate is an ideal supplement for courses on political parties. Not only is it clear and engaging for students, but it makes a solid contribution to the scholarship. We know a lot about the influence of parties on political behavior, but much less on how the parties are actually evaluated. Brewer goes a long way in filling this gap."