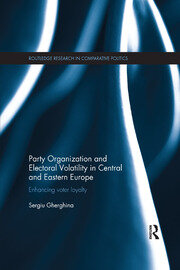 Political parties in post-communist countries have very high levels of electoral volatility. In these environments, political factions fail to establish long-term connections with the electorate and thus regularly rise and fall from the political arena.

This book provides an organizational explanation for the variations in party-level electoral volatility. It looks comparatively at 29 political parties in six Central and Eastern European democracies between 1990 and 2008 to examine how political parties can influence their electoral environment. Using empirical evidence, Gherghina tests the effect of candidate selection procedures, membership organizations, and re-nomination of incumbent MPs on voters’ loyalty, and in doing so, demonstrates how party organization greatly affects electoral stability.

Including case studies from Bulgaria, Czech Republic, Hungary, Poland, Romania, and Slovakia this book will be of interest to students and scholars of comparative politics, party politics, democratization, elections, and Central and Eastern European politics.

Party organisation is a crucial but under-researched topic in the comparative politics literature. By providing us with a sophisticated and theoretically-grounded empirical contribution to this important sub-field and examining the link between party internal structures and electoral volatility, Sergiu Gherghina has made an extremely valuable contribution to our understanding of this topic. This is an extremely impressive piece of scholarship and I would recommend it to all party scholars, not just those researching the post-communist states of Central and Eastern Europe.

The relatively high instability of party politics in Eastern Central Europe is a well established fact. So far, however, little systematic research has been done on the sources of cross-party variation in the degree of instability. This book demonstrates that the electoral volatility of individual parties is most closely related to continuity in party elites and to the character of candidate-nomination. Sergiu Gherghina relies on cross-sectional statistical analyses, longitudinal case-studies and pairwise comparisons. His in-depth knowledge of the region allows him to place the results of the analyses in proper political context. Next to contributing to the research on party organizations and on electoral volatility, the book also familiarizes the reader with the dynamics of regional party politics. Altogether a particularly informative and well focused study.

Party organization seems so passé, so twentieth century, but as Sergiu Gherghina's carefully crafted study highlights, a well-developed organization helps parties survive and thrive in the turbulent world of post-communist politics. His path-breaking finding that rather than the virility symbol of a large membership, it is the often neglected aspects of candidate selection and MP renomination rates which can make all the difference is an important contribution to the study of parties in the region. Moreover, these findings are not just significant for political scientists seeking to navigate their way around the maze of party politics in Central and Eastern Europe, but also provide lessons for party leaders who wish to ensure their organization's longevity.

What explains variation in electoral volatility in post-communist democracies? Sergiu Gherghina’s excellent study demonstrates that internal organization of political parties can make a decisive difference to their electoral performance. Party organizations matter in a fluid post-communist context. Anyone interested in the development and performance of political parties in new democracies should read this book.