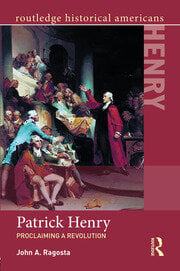 Often referred to as "the voice of the Revolution," Patrick Henry played a vital role in helping to launch the revolt of the American colonies against British rule. An early and compelling Revolutionary orator, Henry played an active part in the debates over the founding of the United States. As a leading anti-federalist, he argued against the ratification of the Constitution, and at the state level, he opposed Thomas Jefferson’s Statute of Religious Freedom in Virginia. In both his political triumphs and defeats, Henry was influential in establishing the nature of public discourse for a generation of new Americans.

In this concise biography, John A. Ragosta explores Henry’s life and his contributions to shaping the character of the new nation, placing his ideas in the context of his times. Supported by primary documents and a supplementary companion website, Patrick Henry: Proclaiming a Revolution gives students of the American Revolution and early Republic an insightful and balanced understanding of this often misunderstood American founder.

John A. Ragosta is a Fellow at Virginia Foundation for the Humanities and a Visiting Assistant Professor at Randolph College. He is the author of Religious Freedom: Jefferson's Legacy, America's Creed (2013) and Wellspring of Liberty: How Virginia's Religious Dissenters Helped Win the American Revolution and Secured Religious Liberty (2010).

"Patrick Henry is the best short biography we have of a much misunderstood patriot, too often overshadowed by the brilliance of his own electrifying oratory. John Ragosta’s elegant and judicious account of Henry’s career as a statesman and lawyer restores the great Revolutionary to his proper place in the American pantheon."

"Best remembered for his phrase ‘Give me liberty, or give me death,’ Patrick Henry was one of the earliest to lead the patriot movement against Britain.  Like Sam Adams, he never attained the posthumous celebrity of the other founders primarily because of his opposition to the creation of a strong central government and his refusal to accept national office.  Aimed at college students and young adults, this is an excellent account of his role and contribution whose study offers a very different perspective of one who opposed many of the developments of the early national period including the separation of church and state.  Nevertheless, he had a major influence on the course of events and his words continue to inspire."

"Both literate and succinct, John A. Ragosta’s Patrick Henry: Proclaiming a Revolution ably recounts the familiar contours of Henry’s fame as an orator and 'consummate lawyer' while also recognizing his character as 'not only a great orator, but a seasoned politician, an accomplished lawyer, a loving father, and a patriot'"