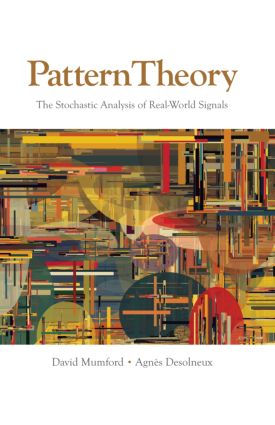 Pattern theory is a distinctive approach to the analysis of all forms of real-world signals. At its core is the design of a large variety of probabilistic models whose samples reproduce the look and feel of the real signals, their patterns, and their variability. Bayesian statistical inference then allows you to apply these models in the analysis of new signals.

This book treats the mathematical tools, the models themselves, and the computational algorithms for applying statistics to analyze six representative classes of signals of increasing complexity. The book covers patterns in text, sound, and images. Discussions of images include recognizing characters, textures, nature scenes, and human faces. The text includes online access to the materials (data, code, etc.) needed for the exercises.

The book comes with a large number of exercises and problems, some requiring computer programming. Thanks to these, it can be used as a textbook to support a quite original course that could be offered by a department of applied mathematics, computer science or electrical engineering. In fact, this excellent book targets and deserves a broad readership. It will provide precious and interesting material to anyone who would like to discover pattern theory and how it traverses across geometry, probability and signal processing.

… a masterpiece. It is one of the best books I have ever read. … What singles out this outstanding book is an extremely original subject development. … This book is so exciting. It is a detective fiction. It is an inquiry into ‘real-world signals.’ In contrast to most detective stories, the beauty of the style is exceptional and meets the standards of the best writers. Art and beauty are present everywhere in this marvelous book. … The overall organisation of the book is also marvelous. … The authors are leaders in signal and image processing and this book is based on their extremely innovative research. Reading this book is like entering David Mumford’s office and beginning a friendly and informal scientific discussion with him and Agnès. That is a good approximation to paradise.

Pattern Theory covers six classic attempts at modeling signals from the human and natural world: natural language (written), music, character recognition, texture modeling, face recognition, and natural scenes. These applications, appealing to students and researchers alike, include fourteen 'crash courses' giving all the needed basics, exercises, and numerical simulations. … a complete pedagogic tool at master or first-year graduate level. I endorse the publication of Pattern Theory, and will actually use it and recommend it to other researchers.

This book is fascinating. It develops a statistic approach to finding the patterns in the signals generated by the world. The style is lucid. I’m reminded of Mumford’s exposition of Theta functions and Abelian varieties in his Tata lectures. The exposition is thorough. The authors provide the necessary mathematical tools allowing scientists to pursue an exciting subject. I’ve been running a seminar at MIT entitled ‘New Opportunities for the Interactions of Mathematics and Other Disciplines’ because I’m convinced that mathematics will move in surprising new directions. Pattern Theory, a decade’s effort, is a prime example.

What Is Pattern Theory?

The Manifesto of Pattern Theory

The Basic Types of Patterns

Basics I: Entropy and Information

Measuring the n-gram Approximation with Entropy

Markov Chains and the n-gram Models

The Geometric Model for Notes via Poisson Processes

The Medial Axis for Planar Shapes

(u + v)-Models for Image Segmentation

Deterministic Algorithms to Approximate the Mode of a Gibbs Field

Empirical Data on Deformations of Faces

Natural Scenes and their Multiscale Analysis

High Kurtosis in the Image Domain

Scale Invariance in the Discrete and Continuous Setting

The Continuous and Discrete Gaussian Pyramids

Wavelets and the "Local" Structure of Images

Mode lII: Images Made Up of Independent Objects

Appendix: A Stability Property of the Discrete

David Mumford is a professor emeritus of applied mathematics at Brown University. His contributions to mathematics fundamentally changed algebraic geometry, including his development of geometric invariant theory and his study of the moduli space of curves. In addition, Dr. Mumford’s work in computer vision and pattern theory introduced new mathematical tools and models from analysis and differential geometry. He has been the recipient of many prestigious awards, including U.S. National Medal of Science (2010), the Wolf Foundation Prize in Mathematics (2008), the Steele Prize for Mathematical Exposition (2007), the Shaw Prize in Mathematical Sciences (2006), a MacArthur Foundation Fellowship (1987-1992), and the Fields Medal (1974).