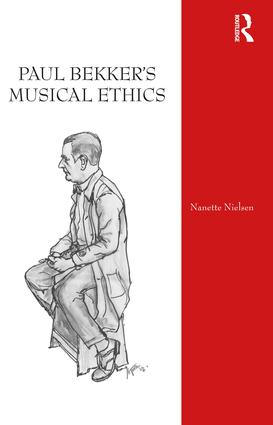 German music critic and opera producer Paul Bekker (1882–1937) is a rare example of a critic granted the opportunity to turn his ideas into practice. In this first full-length study of Bekker in English, Nanette Nielsen investigates Bekker's theory and practice in light of ethics and aesthetics, in order to uncover the ways in which these intersect in his work and contributed to the cultural and political landscape of the Weimar Republic. By linking Beethoven's music to issues of freedom and individuality, as he argues for its potential to unify the masses, Bekker had already in 1911 begun to construct the ethical framework for his musical sociology and opera aesthetics. Nielsen discusses some of the complex (and conflicting) layers of modernism and conservatism in Bekker that would have a continued presence in his work and its reception throughout his career. Bekker's demands for a 'practical ethics' led to his criticisms of metaphysically grounded approaches to aesthetics, and his ethical views are put into further relief in a sketch of the development of his music phenomenology in the 1920s. Nielsen unravels the complex intersections between Bekker's ethics and his opera aesthetics in connection with his practice as an Intendant at the Wiesbaden State Theatre (1927–1932), offering a critical reading of an opera staged during his tenure: Hugo Herrmann’s Vasantasena (1930). Further works are considered in light of the theoretical framework underpinning the book, inspired by several intersections between ethics and aesthetics encountered in Bekker's work.

The pre-1914 expansion of the audience for symphonic and operatic music inspired, sometimes shocked a new generation of music critics. Their debates signaled music’s emergence as a mass-cultural form, but few matched Bekker’s illumination of contemporaries like Mahler, Schoenberg and Schreker, or his ability to enrage conservative colleagues. This first English study opens an invaluable window on a major musical thinker of the modern era.

In this first book-length study in English of Paul Bekker’s dual legacy as writer and opera practitioner, Nanette Nielsen makes a persuasive case for his "unfailing relevance to a contemporary audience." Prof. Nielsen shows in her detailed account how Bekker’s sociological aesthetic exerted a defining influence on German culture between the wars and, moreover, how his underlying ethical concerns, which provide a common thread in his wide-ranging output, can contribute to an understanding of twentieth-century modernism more broadly.

Nielsen’s command of the ethical and philosophical dimensions, as well as the musical aspects, of Bekker’s lifework lends this study an impressive depth. As a result, Paul Bekker’s Musical Ethics not only offers us a clear view of Bekker in his own time and place but, even more importantly, also reveals his potential value for critical work in the here and now.

1. Paul Bekker: critical scope, life, and writings 2. Intersections of ethics and aesthetics in Bekker’s early writings on music 3. Bekker as cultural critic 4. The burden of utopia: tensions between the metaphysical and the physical 5. Bekker’s ethical aesthetics of opera 6. Bekker as opera practitioner

Nanette Nielsen is an Associate Professor at the University of Oslo, having previously held positions as Associate Professor and Lecturer at the University of Nottingham (2009–2015) and the University of East Anglia (2005–2009). Her publications include the co-authored book Music and Ethics (Ashgate, 2012), and the article 'Ernst Krenek’s problem of freedom in Jonny spielt auf' (Twentieth-Century Music, March 2013), for which she was awarded the 2014 Jerome Roche Prize. She co-edited a special Opera Quarterly issue on 'Opera and Philosophy' (April 2014), and another special issue for The Journal of Sonic Studies on 'Pervasive Drama', for which she also contributed two co-authored articles (May 2015). She is furthermore co-editor of the forthcoming Oxford Handbook of Western Music and Philosophy.