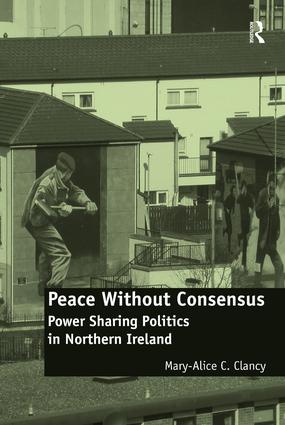 'Peace Without Consensus' demonstrates that the rise of Sinn Féin and the Democratic Unionist Party (DUP) was not 'inevitable'. Rather, it argues that critics who blame Northern Ireland's power-sharing institutions for the electoral triumph of the political 'extremes' in 2003 have not fully considered how the US, British and Irish governments contributed to this outcome. Through interviews with key US, British and Irish officials this groundbreaking analysis, which represents the first examination of the Bush administration's vital role in the peace process, demonstrates that Washington and Dublin were considering a deal between the DUP and Sinn Féin as early as 2002. Profiled in the Guardian, the Observer, BBC Radio Four, the Irish Independent and in Henry McDonald's 'Gunsmoke and Mirrors', Mary-Alice C. Clancy's theoretically informed and empirically grounded book presents new and salient lessons for other regions embroiled in conflict and should be read by all those interested in Northern Ireland's peace process and US foreign policy.

'Mary-Alice Clancy advances a thesis, backed up with facts and interviews, that is highly revelatory. Contrary to the official narrative of the Irish peace process, it was George W Bush's administration that propelled forward negotiations leading to the final power sharing settlement Northern Ireland enjoys. Rather than be a slave to the orthodoxy of the peace process Clancy came to an important conclusion - it was pressure from the Bush White House that forced Sinn Fein to support the police and thus pave the way for Irish republicans to share power with their former unionist enemies. To argue that it was Bush rather than the Clintons who created the conditions for endgame in Ulster is an intellectually courageous enterprise.' Henry McDonald,The Observer, UK 'This valuable and original book underscores the importance of the American dimension to the politics of Northern Ireland. The story of the contribution of the Clinton Administration to the peace process and the Good Friday Agreement is well known. Uncovered by Dr Clancy in a powerful piece of research is a previously untold account of the role that the Administration of George W. Bush played in the consolidation of the peace through the St Andrews Agreement. Anyone interested in American mediation or Irish politics will find this book fascinating.' Adrian Guelke, Queen's University Belfast, UK ’Peace Without Consensus is a carefully researched academic work whose readability is enhanced by a journalistic flair… there is much that is controversial in his book, but there is far more to recommend it as a well-informed and balanced analysis of the roles played by external actors in post-conflict Northern Ireland.’ British Politics Group Quarterly