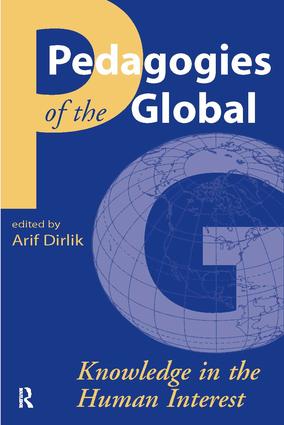 Pedagogies of the Global

The essays in this collection address questions raised by a modernity that has become global with the victory of capitalism over its competitors in the late twentieth century. Rather than erase difference by converting all to European-American norms of modernity, capitalist modernity as it has gone global has empowered societies once condemned to imprisonment in premodernity or tradition to make their own claims on modernity, on the basis of those very traditions, as filtered through experiences of colonialism, neocolonialism, or simple marginalization by the forces of globalization. Global modernity appears presently not as global homogeneity, but as a site of conflict between forces of homogenization and heterogenization within and between nations. Prominent in this context are conflicts over different ways of knowing and organizing the world. The essays here, dealing for the most part with education in the United States, engage in critiques of hegemonic ways of knowing and critically evaluate counterhegemonic voices for change that are heard from a broad spectrum of social, ethnic, and indigenous perspectives. Crucial to the essays' critique of hegemony in contemporary pedagogy is an effort shared by the contributors, distinguished scholars in their various fields, to overcome area and/or disciplinary boundaries and take the wholeness of everyday life as their point of departure.

Part I. Perspectives on Pedagogy; Chapter 1. Arif Dirlik, "Introduction: Our Ways of Knowing-and What to Do About Them?"; Chapter 2. Peter McLaren and Ramin Farahmandpur, "Who Will Educate the Educators? Critical Pedagogy in the Age of Globalization"; Chapter 3. Henry A. Giroux, "Radical Pedagogy and the Terror of Neoliberalism: Rethinking the Significance of Cultural Politics"; Chapter 4. Alexander Woodside, "Transnationalism, Technology, Identity: How New Is the World of the Internet?"; Part II. Our Ways of Knowing; Chapter 5. Arthur Ray, "Anthropology, History, and Aboriginal Rights: Politics and the Rise of Ethnohistory in North America"; Chapter 6. Dylan Rodriguez and Viet Mike Ngo, "Ethnic Studies in the Age of the Prison-Industrial Complex: Reflections on 'Freedom' and Capture, Praxis and Immobilization"; Chapter 7. Susan Searls Giroux, "The Drug War Is the New Jim Crow: Legislating Black Educational Exclusion in the Post-Civil Rights Era"; Chapter 8. Robert Chang, "Who Are You Rooting For? Transnationalism, the World Cup, and War; Part III. Counter-Knowledges; Chapter 9. John Brown Childs, "Boundaries and Community in a Borderless World: Suggestions for Cooperation and Rootedness with a Focus on Black History Month"; Chapter 10. Lily Mendoza, "Strategic Parochialism"; Chapter 11. Dorothee Schreiber and Dianne Newell, "Why Spend a Lot of Time Dwelling on the Past? Understanding Resistance to Contemporary Salmon Farming in Kwakwaka'wakw Territory"; Chapter 12. Jason Younker, "Challenging Infallible Histories: A Miraculous Revival of Dead Indians".