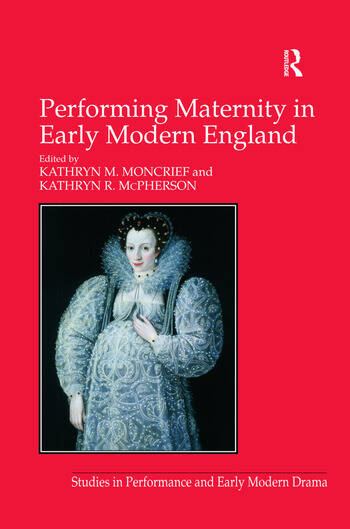 Performing Maternity in Early Modern England features essays that share a common concern with exploring maternity's cultural representation, performative aspects and practical consequences in the period from 1540-1690. The essays interrogate how early modern texts depict fertility, conception, delivery and gendered constructions of maternity by analyzing a wealth of historical documents and images in conjunction with dramatic and non-dramatic literary texts. They emphasize that the embodied, repeated and public nature of maternity defines it as inherently performative and ultimately central to the production of gender identity during the early modern period.

Contents: Embodied and enacted: performances of maternity in early modern England, Kathryn M. Moncrief and Kathryn R. McPherson. Part I The Performance of Pregnancy: 'So troubled with the mother': the politics of pregnancy in The Duchess of Malfi, Sid Ray; 'Show me a child begotten of thy body that I am father to': pregnancy, paternity and the problem of evidence in All's Well That Ends Well, Kathryn M. Moncrief; Hermione's suspicious body: adultery and superfetation in The Winter's Tale, Michelle Ephraim; False fruit: deceptive maternities and the failure of new comedy in Middleton's A Mad World, My Masters, Robert Bell; Maternity in A Woman Killed With Kindness, Lisa Hopkins. Part II The Performance of Maternal Authority: 'Smock-secrets': birth and women's mysteries on the early modern stage, Janelle Jenstad; Disciplining the mother in 17th-century English Puritanism, Christina Luckyj; Male mothering and The Tempest, Suzanne Penuel. Part III The Performance of Maternal Suffering: Dramatizing deliverance and devotion: churching in early modern England, Kathryn R. McPherson; Speaking stones: memory and maternity in Shakespeare's Antony and Cleopatra, Chris Laoutaris; Maternity and child loss in Stuart women's diaries, Avra Kouffman. Part IV The Performance of Maternal Erasure: Nursing and influence in Pandosto and The Winter's Tale, Donna C. Woodford; Murder as birth in Macbeth, Gloria Olchowy; Tamburlaine's domestic threat, Mary Stripling; 'I'll mar the young clerk's pen': sodomy, paternity and circumcision in The Merchant of Venice, Douglas A. Brookes; Selected Bibliography; Index.