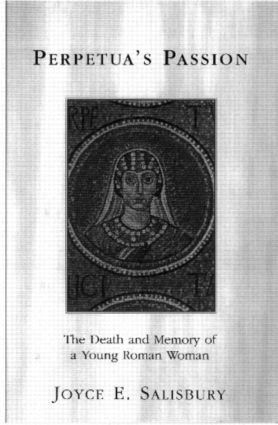 The Death and Memory of a Young Roman Woman, 1st Edition

Perpetua's Passion studies the third-century martyrdom of a young woman and places it in the intellectual and social context of her age. Conflicting ideas of religion, family and gender are explored as Salisbury follows Perpetua from her youth in a wealthy Roman household to her imprisonment and death in the arena.

"…this book is a very pleasant and engaging read, both for the neophyte and for the expert who has come to relish the clarity, precision, and courage of [Salisbury]." -- Religious Studies Review

"Salisbury's investigation of a Christian martydom in 203 and its subsequent impact appeals beyond its apparent natural audience of scholars because it is an engagingly told story." -- Booklist

"Salisbury has performed the important work of bringing the story of Perpetua to a much-deserved wider reading audience. She has also invited readers unfamiliar with the ancient world into its vibrancy and complexity, and she has done so with a good deal of insight and lively narrative style." -- Women's Review of Books

"This remarkably objective, insightful piece of scholarship is highly recommended for all public and academic libraries." -- Library Journal

"Joyce Salisbury takes us on a short but fascinating journey back into time during the early centuries of Christianity, when the new faith was little more than an upstart troublesome cult. Salisbury draws a rich and fully rounded picture of second and third century Carthage…Perpetua's Passion is one of the most readable books I have found on early Christianity in a long time. It will be of interest to anyone concerned with the origins of Christianity, the Roman Empire after the time of Christ, or just general students of religion and history." -- American Reporter

"[A] beautifully written, carefully researched, meticulously documented study…Salisbury's portrait of this remarkable young woman will interest students and scholars of religion and society, the history of Christianity, and women's studies, to be sure, but it is also a great story, engagingly told, one that deserves a larger, general readership, too." -- Booklist

"In a refreshing contrast with countless insipid hagiographies, Salisbury's well-annotated look at Perpetua's martyrdom is clear, thorough, insightful and less a portrait of the person than of the socio-politico-religious context in which she lived and died. Salisbury's sharp analysis strips away generations of patriarchal revisionism to let the young roman matron speak for herself." -- Publisher's Weekly

"An insightful, moving account of the death of an early-third-century Christian martyr, based on her own diary…A uniquely absorbing and poignant study of the vanished world of the early martyrs." -- Kirkus

"Fusing history with biography Salisbury demonstrates how a seismic shift in western culture impinged in a single consciousness. She accomplishes this clearly, elegantly, and with respectful sympathy for its human protagonists."

"The strength of this book is in helping modern readers see martyrdom as less freakish and more palatable within a framework of intelligibility and meaning. It is readable and does not assume developed knowledge of the period or of early Christianity." -- Church History

Joyce E. Salisbury holds the Frankenthal Professorship of Medieval History and Humanities at the University of Wisconsin, Green Bay. She is widely published in the fields of religion and medieval studies, and her most recent books include The Beast Within: Animals and Bestiality in the Middle Ages (Routledge, 1994) and Church Fathers, Independent Virgins (1992).