Persephone Rises, 1860–1927
Mythography, Gender, and the Creation of a New Spirituality 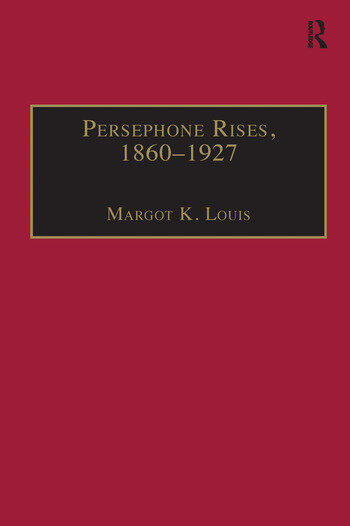 Persephone Rises, 1860–1927: Mythography, Gender, and the Creation of a New Spirituality

Over the course of the nineteenth century, the figure of Persephone rapidly evolved from what was essentially a decorative metaphor into a living goddess who embodied the most spiritual aspects of ancient Greek religion. In the first comprehensive survey of the Persephone myth in English and American literature of the nineteenth and early twentieth centuries, Margot Louis explores the transformation of the goddess to provide not only a basis for understanding how the study of ancient history informed the creation of a new spirituality but for comprehending the deep and bitter tensions surrounding gender that interacted with this process. Beginning with an overview of the most influential ancient texts on Persephone and references to Persephone in Chaucer, Shakespeare, Milton, and Romantic period writing, Louis shows that the earliest theories of matriarchy and patriarchal marriage emerged in the 1860s alongside the first English poems to explore Persephone's story. As scholars began to focus on the chthonic Mystery cults, and particularly on the Eleusinian Mysteries of Demeter and Persephone, poets and novelists explored the divisions between mother and daughter occasioned by patriarchal marriage. Issues of fertility and ritual resonate in Thomas Hardy's Tess of the d'Urbervilles and Willa Cather's My Antonia, while the first advance of a neo-pagan spirituality, as well as early feminist critiques of male mythography and of the Persephone myth, emerge in Modernist poems and fictions from 1908 to 1927. Informed by the latest research and theoretical work on myth, Margot Louis's fascinating study shows the development of Victorian mythography in a new light; offers original takes on Victorian representations of gender and values; exposes how differently male and female Modernists dealt with issues of myth, ritual, and ancient spirituality; and uncovers how deeply the study of ancient spirituality is entwined with controversies about gender.

Contents: Foreword; Preface; Introduction: gods and mysteries: the revival of paganism and the remaking of mythography through the 19th century; A myth appropriated: Greek Persephone to romantic Proserpine; Marriage by capture and the captive wife in Jean Ingelow and Dora Greenwell; Proserpine and pessimism: goddesses of death, life, and language from Swinburne to Wharton; The virgin with the sheaf: fertility, ritual, and imagination in Tess of the D'Urbervilles and My Antonia; 'I am Koré': the modernist underworld and the rising Persephone; Appendices; Index.

Margot K. Louis, who died in August 2007, was Associate Professor of English at the University of Victoria. She was the author of Swinburne and His Gods (1990) and numerous articles on Victorian poetry and mythography.

’Louis adroitly reads treatments of Persephone in poetry, novels, classical studies, and the history of religion. She shows the figure of the abducted goddess in Greek mystery cult and myth to be both index of and catalyst for changing views of gender, culture, religion, marriage, and sexuality in American and European societies during the time period studied. The book thus makes an important contribution to various contemporary disciplines and merits a wide audience... Highly recommended. All readers.’ Choice ’Persephone Rises, completed just days before Louis's death, looks at the uses made of the story, and stands as a fitting testament to her scholarship. The study contains a valuable analysis of classical sources, and charts the myth's subsequent passage through Chaucer, Shakespeare and Milton to the Romantics, but Louis's core interest is the twilight world of Victorian spirituality.’ Times Literary Supplement '... this jargon-free study is worthwhile reading and meditating.' Cahiers victoriens et édouardiens 'Broad in scope yet succinct in exposition, Persephone Rises explores with the rigor of a classicist and the sensitivity of a humanist the many dimensions of its eponymous Greek mythical figure in Victorian and early Modernist literature, situating these manifestations within antique as well as Medieval, Renaissance, and Romantic literary history... Louis succeeds in the difficult task of situating what is essentially an ahistorical narrative body within the historical spaces that contemporary criticism increasingly occupies.' International Journal of the Classical Tradition