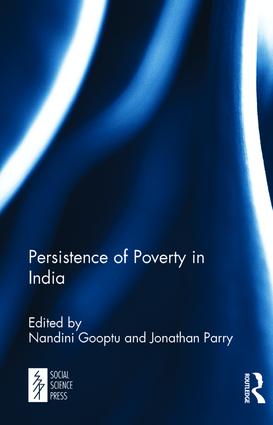 Persistence of Poverty in India

What distinguishes Persistence of Poverty from most other poverty studies is the way in which it conceptualises the problem. This volume offers a variety of alternative analytical perspectives and fresh insights into poverty that are key to addressing the problem. In looking at the day to day lived realities of the poor the volume points out that in order to understand poverty one must take into account the wider system of class and power relations in which it is rooted. This volume suggests that ‘democracy in India may be as big a part of the problem as it is of the solution.’

1. Jonathan Parry, Introduction: On the Persistence of Poverty in India

Part I: Identifying the poor 2. Nandini Gooptu, The Construction of Poverty and the Poor in Colonial and Post-Colonial India: An Overview 3.Himanshu and Kunal Sen, Poverty in India: Measurement, patterns and determinants 4. Penny Vera- Sanso, Reconceiving the Impact of Population Change: A Class- and Gender-based Analysis of Ageing in Poverty in Urban South India

Part IV: Controlling the poor 10. David Picherit, Neither a Dog, nor a Beggar: Seasonal Labour Migration, Development, and Poverty in Andhra Pradesh 11. Julia Eckert, Preventive Laws and the Policing of the Urban Poor

Progress over the Long Haul: Dynamics of Agrarian Change in the Kaveri Delta 14. Barbara Harriss-White, The Dynamic Political Economy of Persistent South Asian Poverty 15. Dwaipayan Bhattacharyya, How to Govern the Poor: The Role of Social Policies in Economic Transformation

Nandini Gooptu is Fellow of St Antony’s College, Oxford, and currently Head of the Department of International Development at Oxford University. She is the author of The Politics of the Urban Poor in Early-Twentieth Century India (Cambridge University Press, 2001) and several highly acclaimed edited volumes.

Jonathan Parry is Emeritus Professor of Anthropology at the London School of Economics and Political Science. He is the author of Caste and Kinship in Kangra (Routledge 1979), Death in Banaras (Cambridge University Press, 1994), and several distinguished edited volumes.