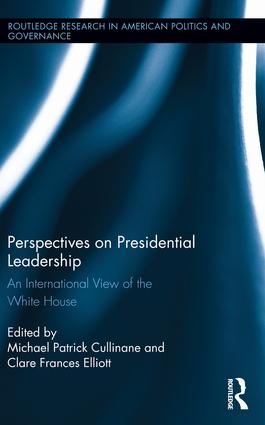 An International View of the White House, 1st Edition

In 2011 Barack Obama invited ten distinguished biographers to the White House to ask them one question: which past American president should I emulate? This was not the first time Obama asked scholars this, but the answer he received would differ as presidential legacies waxed and waned. In 2008 Obama chose Lincoln; in 2009, Reagan; and in 2010, Theodore Roosevelt.

is an examination of presidential legacy, and in particular an analysis of the first ever UK ranking of American presidents which took place in 2011. In thirteen chapters, thirteen individual presidential administrations are assessed. Some presidents have been considered a success, others a failure; both types are featured in these thirteen case studies in a measured attempt to understand how the perception of presidential leadership evolves, shifts, and contorts across three centuries of American politics. The case studies also derive from the expertise of the collected British, Irish and Canadian authors, all of whom are leading scholars in their fields, and many of which took part in the 2011 survey.

At a time when understanding presidential legacy is in high demand, this book offers a unique international perspective. Through extended commentary and inter-disciplinary study of the UK perspective it provides groundbreaking research.

"US presidential leadership studies are making a significant comeback with several recent books by leading scholars. This is probably due to a broader context of crises of US power, the ‘decline’ of the west, and the changing landscape of global power distributions. Unlike other studies, however, this book opens up the question to international scrutiny by scholars from Canada, Britain, and Ireland. The result is an interesting and highly significant work that recognizes a fundamental of world power since 1945: the chief executive of the United States matters, both at home and abroad, even if there are significant structural and contingent factors in explaining presidential effectiveness and stature. This is a significant volume that, it is hoped, will be followed up with an even broader array of international assessments of US presidential leadership."

"An original and thought-provoking look at the American presidency. The combination of well-known presidents like Abraham Lincoln and Franklin D. Roosevelt with lesser-known ones like Andrew Johnson and Warren Harding gives a fresh take and new insights into presidential legacies and sets up well a ‘work-in-progress’ evaluation of the current incumbent, Barack Obama."

Michael Patrick Cullinane is senior lecturer of U.S. history at Northumbria University, UK and a specialist in presidential statecraft, presidential legacies, and transatlantic relations. He is the author of Liberty and American Anti-Imperialism, 1898-1909 (2012) which examines the anti-imperialist movement during the "great debate" in U.S. foreign policy over imperial expansion. Cullinane has also published several articles and chapters on the politics and legacy of Theodore Roosevelt. He is currently working on a lengthier monograph investigating Roosevelt’s posthumous image over a century of memorialization.

Clare Frances Elliott is lecturer in nineteenth-century literature at Northumbria University, UK. Her research interests are in transatlantic literary studies and she is currently editing The Companion to Atlantic Literary Studies for Edinburgh University Press with Leslie Eckel and Andrew Taylor and completing a monograph, Atlantic Blake: Transnational Romanticism. Elliott has edited, with Andrew Hook, Francis Jeffrey’s American Journal (Glasgow: Humming Earth Press, 2011) and is the author of several articles on Francis Jeffrey, William Blake, Ralph Waldo Emerson and Walt Whitman. She serves on the executive committee for the Transatlantic Studies Association.