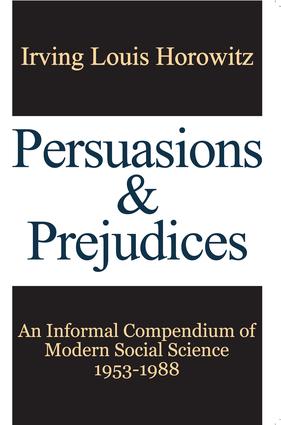 Review essays and statements written for special occasions may reveal as much about the writer as those written about; this is the presumption undergirding this collection of thirty-five years of criticism and commentary by Irving Louis Horowitz. For this volume, he selected his comments on famous, near famous, and infamous sociologists, political scientists, and assorted literary figures in between. Taken as a whole, this volume will surprise and delight readers who are acquainted with Horowitz's other works as well as those who are interested in the people he writes about.

The book covers notable social scientists, from Arendt to Zetterberg, and such major figures in between as Becker, Bell, de Jouvenel, Mills, Parsons, Solzhenitsyn, and more than eighty others who have had an effect on the contemporary social and political landscape. Each is critically examined, sometimes positively, other times negatively. Horowitz was a major figure in his own right, and his writing here displays the kind of refreshing frankness experts will expect and the general reader will appreciate.

The underlying assumption behind the volume, giving its disparate parts a unified characteristic, is that together these observations on others amount to a general perspective on social science held by the author. Whether his larger ambition is accepted or disputed, there is no doubt that the volume provides a standard against which to measure the literary quality of writing in the world of professional social research.

2 Diderot: Science and Society in the Enlightenment

3 Dilthey: The Pre-History of the Sociology of Knowledge

5 Gentile: On the Social Theories of Fascism

6 Hobbes: On Power and Statecraft

8 Kahler: History and Society in Retrospect

9 Lewis: Rationalism and Irrationalism in History

10 Machiavelli: Means and Ends in Nationalism

18 Casanova: Democracy and Development in a One-Party State

20 Eckstein: The Rise and Fall of Counter Insurgency

33 Porter: Power and Change in an Industrial Context

34 Portes: The Politics of Urban Research

45 Herberg: Eclecticism in Search of an American Theology

46 Kuper: The Politics of Genocide

48 Sombart: The Jews and Modern Communism

54 Crozier: The Rise and Fall of Practically Everything

56 Dye: Is There an American Power Elite?

62 Grana: Culture of Sociology and Sociology of Culture

63 Heilbroner: Is the Future an Extension of the Present?

64 Henry: The Banality of Culture

66 Mills: A Postscript to a Sociological Utopian

71 Rogow: A Funeral Pyre for America

75 Aron: Tribune of the Intelligentsia

78 Edel: Is a Science of Ethics Possible?

79 Ginsberg: The Responsibilities of Sociology

80 deJouvenel: The Tragedy of Triumphalism

83 Lynd and Lynd: Knowledge for Democracy

86 Talmon: Visions of Revolution and Values of Europe

87 Weizenbaum: Knowledge and Its Values