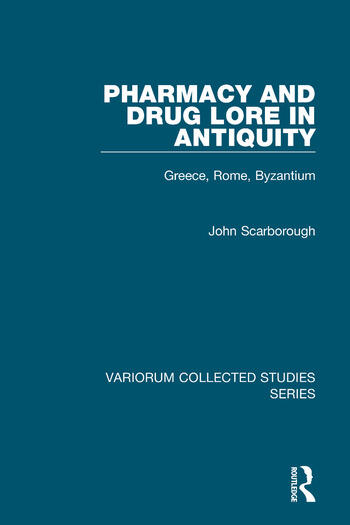 Professor Scarborough brings together here fourteen of his essays on ancient drugs and pharmacy, dealing with aspects of a pharmacology and medical botany that incorporate magic, astrology, and alchemy, as well as the expected theoretical constructs of elements, qualities, and humors. Clinical application of salves for burns was a skill of long standing, as one essay demonstrates, and another suggests Hippocratic pharmacology's sophistication, as does consideration of the herbal lore in Theophrastus' remarkable Enquiry into Plants. A major concern among Greek, Roman, and Byzantine medical practitioners was toxicology and the fundamental collection of data on poisonous plants and animals, and two studies take up snakes, spiders, insects, and related creatures with suggested antidotes in the difficult poems of Nicander of Colophon, while another focuses on Dioscorides' perceptive analysis of the effects of the opium poppy. Aloe in the drug commerce of the early Roman Empire is considered along with the life and career of Criton, a personal physician to Trajan, and some of Galen's pharmacology as reflected in his commentaries on Hippocrates. The collection concludes with two studies that explicate early Byzantine pharmacology and how garden lore in Byzantine times contributed to practical pharmacy.

Contents: Preface; The pharmacology of sacred plants, herbs and roots; On medications for burns in classical antiquity; Theoretical assumptions in Hippocratic pharmacology; Theophrastus on herbals and herbal remedies; Nicander's toxicology, I: snakes; Nicanders toxicology, II: spiders, scorpions, insects and myriapods; The opium poppy in Hellenistic and Roman medicine; Roman pharmacy and the Eastern drug trade: some problems illustrated by the example of aloe; Pharmacy in Pliny's Natural History: some observations on substances and sources; The pharmacy of methodist medicine: the evidence of Soranus' Gynecology; Criton, physician to Trajan: historian and pharmacist; Pharmaceutical theory in Galen's commentaries on the Hippocratic epidemics: some observations on Roman views of Greek drug lore; Early Byzantine pharmacology; Herbs of the field and herbs of the garden in Byzantine medicinal pharmacy; Addenda and corrigenda; Indexes.

John Scarborough is Professor in the School of Pharmacy at the University of Wisconsin - Madison, USA

'Happily, some of [John Scarborough's] most important publications are collectively reprinted in Pharmacy and Drug Lore in Antiquity, a tome that all who have a serious interest in herbs historically and even presently should have on their bookshelves and in their brain's database... Because of the diversity of wide-ranging studies, it is difficult to convey the importance of John Scarborough to the history of drugs. The salient point is that Scarborough's meticulous attention to detail, combined with a thorough command of ancient languages, mastery of biographical data, and lively, charming writing style, deserve the attention of all people who are interested in herbal medicine.' HerbalGram 'This book is not only a valuable reference, but a model of scholarship.' Social History of Medicine 'Taken together, these essays document an extensive, variegated, and evolving knowledge of drugs in both the medical writings and popular beliefs and practices of Greek, Roman, and Byzantine antiquity. Scholars will find in them a valuable resource, enhanced by an index that enables study of single topics across the separately paginated chapters. They should also appeal to anyone with a serious interest in the long and multifaceted human experience with drugs.' Bulletin for the History of Chemistry ’The wide scope and the range of approaches adopted are the key strength of the book which is well researched and written...’ Social History of Medicine