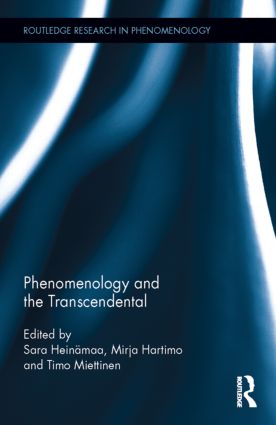 Phenomenology and the Transcendental

The aim of this volume is to offer an updated account of the transcendental character of phenomenology. The main question concerns the sense and relevance of transcendental philosophy today: What can such philosophy contribute to contemporary inquiries and debates after the many reasoned attacks against its idealistic, aprioristic, absolutist and universalistic tendencies—voiced most vigorously by late 20th century postmodern thinkers—as well as attacks against its apparently circular arguments and suspicious metaphysics launched by many analytic philosophers? Contributors also aim to clarify the relations of transcendental phenomenology to other post-Kantian philosophies, most importantly to pragmatism and Wittgenstein’s philosophical investigations. Finally, the volume offers a set of reflections on the meaning of post-transcendental phenomenology.

"Phenomenology and the Transcendental provides a wide-ranging and thought-provoking exploration of the transcendental character of phenomenology. Encompassing historical and contemporary discussions, and including important essays by key figures such as Carr, Crowell, and others, it is a fine collection that demonstrates the enormous strength of phenomenology as a continuing and expanding domain of inquiry as well as its increasing interdisciplinary significance and engagement" – Jeff Malpas, Distinguished Professor, University of Tasmania, Australia

Timo Miettinen is a postdoctoral researcher in the Network for European Studies, Department of Political and Economic Studies at the University of Helsinki, Finland.