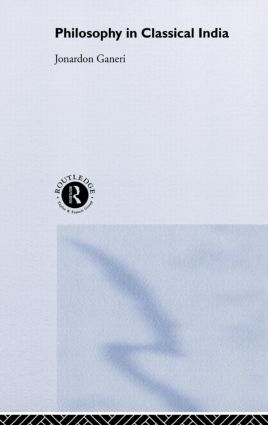 An Introduction and Analysis, 1st Edition

This original work focuses on the rational principles of Indian philosophical theory, rather than the mysticism more usually associated with it. Ganeri explores the philosophical projects of a number of major Indian philosophers and looks into the methods of rational inquiry deployed within these projects. In so doing, he illuminates a network of mutual reference, criticism, influence and response, in which reason is used to call itself into question. This fresh perspective on classical Indian thought unravels new philosophical paradigms, and points towards new applications for the concept of reason.

'… a brilliant contribution to the study of some of the basic questions of classical Indian Philosophy, and at the same time quite a convincing presentation of new philosophical paradigms … What is striking in Ganeri's work is the commendable combination of sound grasp of the Sanskrit texts with outstanding interpretive skills. There is no doubt that the book will be acknowledged as a pathfinder in the interpretation of classical Indian Philosophy.' - John Vattanky, De Nobili College, India, Nagoya Studies in Indian Culture and Buddhism

'Excellent, just what we need right at this moment.' - Arindam Chakrabarti, University of Hawaii at Manoa

Jonardon Ganeri read mathematics at Cambridge before pursuing graduate studies in philosophy at London and Oxford. He is the author of Semantic Powers: Meaning and the Means of Knowing in Classical Indian Philosophy 0Clarendon Press, 1999). He is currently Spalding Fellow in Comparative Religions, Clare Hall, Cambridge