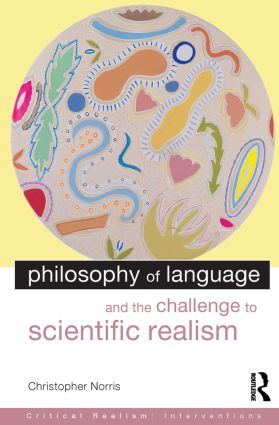 Philosophy of Language and the Challenge to Scientific Realism

In this book Christopher Norris develops the case for scientific realism by tackling various adversary arguments from a range of anti-realist positions. Through a close critical reading he shows how they fail to make adequate sense on any rational, consistent, and scientifically-informed survey of the evidence. Along the way he incorporates a number of detailed case-studies from the history and philosophy of science. Norris devotes much of his discussion to some of the most prominent and widely influential source-texts of anti-realism. Also included are the sophisticated versions of verificationism developed - albeit in very different ways - by thinkers such as Michael Dummett and Bas van Fraassen. Central to Norris's argument is a prolonged engagement with the once highly influential but nowadays neglected work of Norwood Russell Hanson. This book will be welcomed especially by readers who possess some knowledge of the background debate and who wish to deepen and extend their understanding of these issues beyond an introductory level.

Critical Realism is a broad movement within philosophy and social science. It is a movement that began in British philosophy and sociology following the founding work of Roy Bhaskar, Margaret Archer and others. Critical Realism emerged from the desire to realise an adequate realist philosophy of science, social science, and of critique. Against empiricism, positivism and various idealisms (interpretivism, radical social constructionism), Critical Realism argues for the necessity of ontology. The pursuit of ontology is the attempt to understand and say something about ‘the things themselves’ and not simply about our beliefs, experiences, or our current knowledge and understanding of those things. Critical Realism also argues against the implicit ontology of the empiricists and idealists of events and regularities, reducing reality to thought, language, belief, custom, or experience. Instead Critical Realism advocates a structural realist and causal powers approach to natural and social ontology, with a focus upon social relations and process of social transformation.