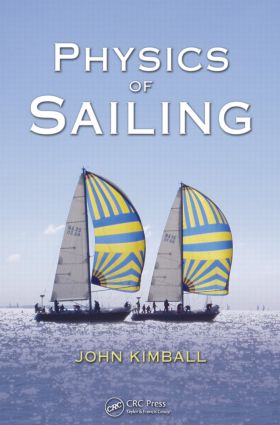 Breaking down the complicated concepts of speed, acceleration, torque, fluid mechanics, and surface physics, Physics of Sailing provides a lively, easily accessible introduction to the basic science underlying the sport of sailing. It illustrates the many ways physics can be used to understand the principles of sailboat propulsion and how a scientific understanding of the boat, wind, and water can lead to more skillful sailing.

After a brief but insightful tour of the history of sailing, the book explores the physics involved in making faster sailing crafts for both upwind and downwind sailing, including Newton’s impact theory of fluid resistance and lift and drag phenomena. It compares possible sail shapes, presents measurements of hull smoothness, and describes wind turbulence, the nature of water waves, and the structure of wakes. Using the physics of optics, the author also explains the connection between water’s appearance and the wind. Along with a glossary of sailing terms, he includes many examples throughout to illustrate the concepts in practice.

Avoiding unnecessary formalisms, this book skillfully applies the principles of fluid mechanics to sailboat technology and the art of sailing. It should help you become a more knowledgeable sailor.

… a potpourri of good physics picking on the many areas in which basic and not so basic physics apply. … The chapter on fluid dynamics sets this book apart by its sceptical and pragmatic approach … Kimball puts each idea in its place showing where its strengths and weaknesses are. In doing so he provides a rare overview which so many books fail to give. … Chapters on wind generation and strategy conclude a fascinating read. … it is an intriguing gathering together of many disparate ideas which will keep the sailing scientist quiet in his bunk for many evenings. Also, it should be a standard introduction to any fluid dynamics course.

… an excellent introduction to the forces that enable sailboats to perform … . John Kimball has contributed a readable explanation of the physics behind sailing that will appeal to a wide range of technically oriented readers.

The book is very well written and informative.

I like the book very much. It is well written and … fills a nice gap between my very introductory book and an even more detailed, mathematical approach.

Why Sailing, Why Physics, Why Both?

Why Is Sailing Upwind So Complicated?

Centers of Mass, Buoyancy, and Effort

See How the Mainsail Sets

Why Are Fluids So Complicated?

When Is It Smooth Enough?

The Importance of Waves

John Kimball is a professor of physics at the University of Albany.