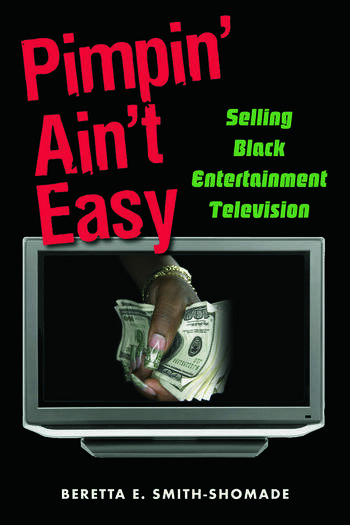 This book explores the legacy of BET: what the network has provided to the larger US television economy, and, more specifically, to its target African-American demographic. The book examines whether the company has fulfilled its stated goals and implied obligation to African-American communities. Has it changed the way African-Americans see themselves and the way others see them? Does the financial success of the network - secured in large part via the proliferation of images deemed offensive and problematic by many black communities - come at the expense of its African-American audience?

This book fills a major gap in black television scholarship and should find a sizeable audience in both media studies and African-American studies.

4. Impossibility of Us: BET Impact

5. It’s Your Turn: Black to the Future

Beretta E. Smith-Shomade is Associate Professor of Media Arts at the University of Arizona. She also works as a video documentary producer. She is the author of Shaded Lives: African-American Women and Television.

"In Pimpin Ain't Easy, Beretta Smith-Shomade problematizes utopian notions of ‘For Us, By Us’ television by aesthetically, culturally, politically and socio-historically contextualizing the industrial trajectories of BET and the promise often left unfulfilled in its niched programming. Smith-Shomade's analysis offers an immensely valuable critical intervention that is engaging for scholarly and general readers."--Bambi Haggins, author of Laughing Mad: The Black Comic Persona in Post Soul America

"Focusing on the present and potential of capitalism, the hope of representation and the expectations of each, Smith-Shomade’s Pimpin Ain't Easy makes insightful and principled connections between gender, race and Black Entertainment Television (BET).  An exceptional scholarly work, it promises to reshape the field and refocus how students view and respond to television today."--Daniel Bernardi, editor of Classic Hollywood, Classic Whiteness

"Smith-Shomade provides a long overdue critical and detailed examination of BET--a cultural institution of crucial importance for exploring the complexity of culture and commerce, specifically for assessing U.S. racial politics and shifts toward narrowcast media. Her careful situation of the network's programming amidst its particular industrial context and discussions of the potential and limitations of black-owned businesses make the book a valuable contribution for understanding the complicated role of media ownership in cultural policy."--Amanda D. Lotz, author of The Television Will Be Revolutionized

"For nearly three decades, Black Entertainment Television (BET) has elicited intense scrutiny and pride, representative of its contradictory role as both the promise and the failure of black achievement in the post-civil rights era.  As such, Beretta E. Smith-Shomade's trenchant new study is not only timely and necessary, but critically in snyc with the competing forces in the struggle to define and own 'blackness' in the 21st century and beyond."--Mark Anthony Neal, author of New Black Man

"BET has become synonymous with great promise, as well as tremendous pain.  Through an interweaving of historical, cultural, ethnographic, and industry analyses, as well as personal memory, Beretta E. Smith-Shomade gives equal attention to BET's achievements and failures.  Pimpin' Ain't Easy: Selling Black Entertainment Television offers a rigorous, lucid interpretation of how BET is as much a poster child for capitalistic success as it is for undermining African Americans through its representations and business practices."--Robin R. Means Coleman, editor of Say it Loud!: African-American Audiences, Media, and Identity

"For lots of us, Black Entertainment Television still bears the heavy burden of black representation.  In her engaging new book, Pimpin' Ain't Easy: Selling Black Entertainment Television, Beretta E. Smith-Shomade asks the hard questions and critically reports on what sort of job our premiere black television network does in bearing the burdens of black representation: whether or not BET's access to Viacom's vast resources helped ease the burden and if the very meaning of blackness in the post-soul, post-black, post-network era makes BET a more significant media voice than they've ever been or just another brand in search of a market."--Herman S. Gray, author of Cultural Moves: African Americans and the Politics of Representation

"A pioneering study, Pimpin' Ain't Easy, demonstratses how African-American and ethnic minority television ownership need to be contextualized within the legal, industrial, and economic processes of the medium, as well as within the broader historical and contemporary issues of race, politics, culture, and the expectations of marginalized communities/groups.  Smith-SHomade has written a highly engaging, theory-rich book that brings to the forefront the catch-22 predicament of television access and representation in the market-driven structure that defines U.S. television."--Yeidy M. Rivero, author of Tuning Out Blackness: Race and Nation in the History of Puerto Rican Television

"Pimpin' Ain't Easy lucidly examines the contradictory strands that have made up twenty seven years of the Black Entertainment Television channel.  Seemingly a coup for American TV's openness to diversity, the BET business myth is picked apart in a model of careful, engaged scholarship.  Beretta Smith-Shomade is a vigorous and crucial voice on 'race' and media."--John D.H. Downing, co-author of Representing 'Race': Racisims, Ethnicities and Media