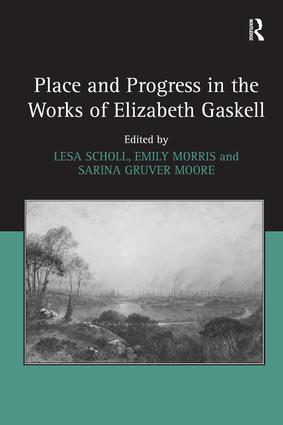 Critical assessments of Elizabeth Gaskell have tended to emphasise the regional and provincial aspects of her writing, but the scope of her influence extended across the globe. Building on theories of space and place, the contributors to this collection bring a variety of geographical, industrial, psychological, and spatial perspectives to bear on the vast range of Gaskell’s literary output and on her place within the narrative of British letters and national identity. The advent of the railway and the increasing predominance of manufactory machinery reoriented the nation’s physical and social countenance, but alongside the excitement of progress and industry was a sense of fear and loss manifested through an idealization of the country home, the pastoral retreat, and the agricultural south. In keeping with the theme of progress and change, the essays follow parallel narratives that acknowledge both the angst and nostalgia produced by industrial progress and the excitement and awe occasioned by the potential of the empire. Finally, the volume engages with adaptation and cultural performance, in keeping with the continuing importance of Gaskell in contemporary popular culture far beyond the historical and cultural environs of nineteenth-century Manchester.

"This fine collection of essays, timed perfectly to coincide with the 150th anniversary of Gaskell’s death, will reach a broad audience from undergraduates to post-graduate researchers." - Deirdre d'Albertis, Bard College, USA, author of Dissembling Fictions: Elizabeth Gaskell and the Victorian Social Text

"Overall, this is an excellent collection which succeeds in viewing Gaskell apart from the ‘purely parochial construction of place’ that has historically dominated her critical reception (p. 3). It will be of great interest and usefulness to the increasing number of scholars who are drawn to the riches of Gaskell’s writings." - Jude Piesse, Liverpool John Moores University, UK

Gaskell on the waterfront: leisure, labor, and maritime space in the mid-19th century

'You might pioneer a little home': hybrid spaces, identities, and homes in Elizabeth Gaskell's North and South

Unimagined community and disease in Ruth

Temporally out of sync: migration as fiction and philanthropy in Gaskell's life and work

Moving between North and South: cultural signs and the progress of modernity in Elizabeth Gaskell's novel

In search of shared time: national imaginings in Elizabeth Gaskell's North and South

Catching the post: Elizabeth Gaskell as traveler and letter-writer

Gaskell the ethnographer: the case of 'modern Greek songs'

Reading 'an every-day story' through bifocals: seriality and the limits of realism in Elizabeth Gaskell's Wives and Daughters

Women's voices in the Pre-Raphaelite space of Elizabeth Gaskell's novels

'Look back at me': the material re-performance of the Victorian in North and South (2004)