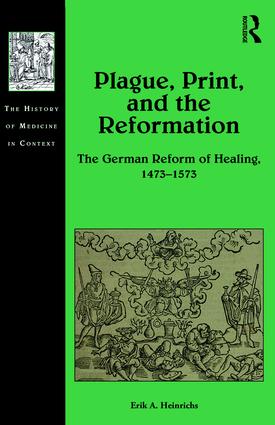 Plague, Print, and the Reformation

By Erik A. Heinrichs

This book surveys a neglected set of sources, German plague prints and treatises published between 1473 and 1573, in order to explore the intertwined histories of plague, print, medicine and religion during the Reformation era. It argues that a particularly German reform of healing flourished in printed texts during the Renaissance and Reformation as physicians and clerics devised innovative responses to the era’s persistent epidemics. These reforms are "German" since they reflect the innovative trends that originated in or were particularly strong within German-speaking lands, including the rapid growth of vernacular print, Protestantism, and new interest in alchemy and the native plants of Northern Europe that were unknown to the ancients. Their reforms are also "German" in the sense that they unfolded mainly in vernacular print, which encouraged physicians to produce local knowledge, grounded in personal experience and local observations as much as universal theories. This book contributes to the history of medicine and science by tracing the growth of more empirical forms of medical knowledge. It also contributes to the history of the Renaissance and Reformation by uncovering the innovative contributions of various forgotten physicians. This book presents the broadest study of German plague treatises in any language.

2. The German Medicine of Johann Vochs: Medical and Cultural Reform on the Eve of the Reformation

3. The Reformation of Healing: Plague, Physicians and Protestantism in the 1520s

5. The Flourishing of German Medicine, 1530-1580: Humanism, Empiricism, and Protestantism

Erik A. Heinrichs is an associate professor of history at Winona State University.

The History of Medicine in Context

For more than 20 years The History of Medicine in Context series has provided a unique platform for the publication of research pertaining to the study of medicine from broad social, cultural, political, religious and intellectual perspectives. Offering cutting-edge scholarship on a range of medical subjects that cross chronological, geographical and disciplinary boundaries, the series consistently challenges received views about medical history and shows how medicine has had a much more pronounced effect on western society than is often acknowledged. As medical knowledge progresses, throwing up new challenges and moral dilemmas, The History of Medicine in Context series offers the opportunity to evaluate the shifting role and practice of medicine from the long perspective, not only providing a better understanding of the past, but often an intriguing perspective on the present.