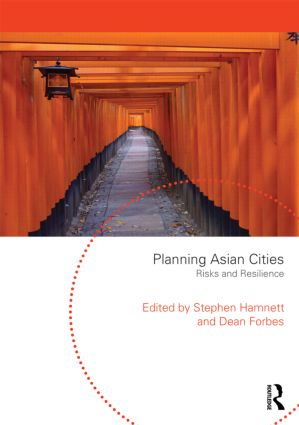 In Planning Asian Cities: Risks and Resilience, Stephen Hamnett and Dean Forbes have brought together some of the region’s most distinguished urbanists to explore the planning history and recent development of Pacific Asia’s major cities.

They show how globalization, and the competition to achieve global city status, has had a profound effect on all these cities. Tokyo is an archetypal world city. Singapore, Hong Kong and Seoul have acquired world city characteristics. Taipei and Kuala Lumpur have been at the centre of expanding economies in which nationalism and global aspirations have been intertwined and expressed in the built environment. Beijing, Hong Kong and Shanghai have played key, sometimes competing, roles in China’s rapid economic growth. Bangkok’s amenity economy is currently threatened by political instability, while Jakarta and Manila are the core city-regions of less developed countries with sluggish economies and significant unrealized potential.

But how resilient are these cities to the risks that they face? How can they manage continuing pressures for development and growth while reducing their vulnerability to a range of potential crises? How well prepared are they for climate change? How can they build social capital, so important to a city’s recovery from shocks and disasters? What forms of governance and planning are appropriate for the vast mega-regions that are emerging? And, given the tradition of top-down, centralized, state-directed planning which drove the economic growth of many of these cities in the last century, what prospects are there of them becoming more inclusive and sensitive to the diverse needs of their populations and to the importance of culture, heritage and local places in creating liveable cities?

Professor Stephen Hamnett is Emeritus Professor of urban and regional planning at the University of South Australia. He is also a Commissioner of the Environment, Resources and Development Court of South Australia. Stephen’s research interests focus on metropolitan strategic planning and on planning law and governance. He is a member of a number of journal editorial boards, including ‘Built Environment’ and ‘Cities’. Stephen Hamnett has a long record of involvement in planning issues in Asia, including projects on urban and regional development for AusAID and other international agencies in Indonesia, China, the Philippines, Malaysia and elsewhere. His previous books include ‘The Australian Metropolis’ (2000) with Robert Freestone. In 2009 he was awarded the prestigious Lifetime Achievement Award of the Planning Institute of Australia for outstanding and sustained contributions to planning and planning education.

is an urbanist with a special interest in knowledge-based development in contemporary Pacific Asian cities. He was a chief investigator for a recently completed project on strengthening urban slum upgrading and urban governance in Southeast Asia. Dean Forbes is on the editorial boards of Asian Pacific Viewpoint and the International Journal of Knowledge-Based Development, and was an Advisory Board member of the Encyclopedia of Urban Cultures. In 1994 he was elected a Fellow of the Academy of Social Sciences in Australia.His previous appointments include the Australian National University, Monash University and the University of Papua New Guinea. He has worked for AusAID and the Australian Institute of Urban Studies, and has been a consultant to the United Nations Development Program, the United Nations Population Fund, International Labour Organization and AusAID.

This series offers a unique window on the creation of the modern environment. Designed for an international readership, the emphasis is on:

Within this framework the books address three themes: