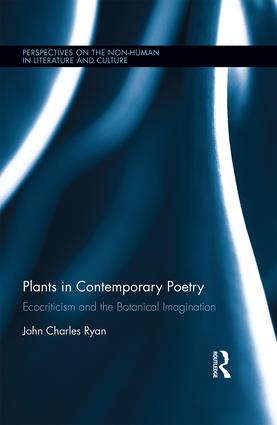 Positioned within current ecocritical scholarship, this volume is the first book-length study of the representations of plants in contemporary American, English, and Australian poetry. Through readings of botanically-minded writers including Les Murray, Louise Glück, and Alice Oswald, it addresses the relationship between language and the subjectivity, agency, sentience, consciousness, and intelligence of vegetal life. Scientific, philosophical, and literary frameworks enable the author to develop an interdisciplinary approach to examining the role of plants in poetry. Drawing from recent plant science and contributing to the exciting new field of critical plant studies, the author develops a methodology he calls "botanical criticism" that aims to redress the lack of emphasis on plant life in studies of poetry. As a subset of ecocriticism, botanical criticism investigates how poets engage with plants literally and figuratively, materially and symbolically, in their works. Key themes covered in this volume include plants as invasives and weeds in human settings; as sources of physical and spiritual nourishment; as signifiers of region, home, and identity; as objects of aesthetics and objectivism; and, crucially, as beings with their own perspectives, voices, and modes of dialogue. Ryan demonstrates that poetic imagination is as essential as scientific rationality to elucidating and appreciating the mysteries of plant-being. This book will appeal to a multidisciplinary readership in the fields of ecocriticism, ecopoetry, environmental humanities, and ecocultural studies, and will be of interest to researchers in the emerging area of critical plant studies.

That Porous Line: Mary Oliver and the Intercorporeality of the Vegetal Body

That Seed Sets Time Ablaze: Judith Wright and the Temporality of Plants

On the Death of Plants: John Kinsella’s Radical Pastoralism and the Weight of Botanical Melancholia

Every Leaf Imagined With Us: Vegetal Hope and the Love of Flora in Joy Harjo’s Poetry

John Charles Ryan is a poet and scholar who holds appointments as Postdoctoral Research Fellow in the School of Arts at the University of New England in Australia and Honorary Research Fellow in the School of Humanities at the University of Western Australia. His teaching and research cross between the environmental and digital humanities. He is the author, co-author, editor or co-editor of several research books, including the Bloomsbury title Digital Arts (2014, as co-author), The Language of Plants (University of Minnesota Press, 2017, as co-editor and contributor), and Southeast Asian Ecocriticism (Lexington Books, 2017, as editor and contributor). His poetry works include Katoomba Incantation (Cyberwit, 2011), Two With Nature (Fremantle Press, 2012) and No Requiem for the Forest (Hallowell Press, 2018).

Perspectives on the Non-Human in Literature and Culture

In recent years, many disciplines within the humanities have become increasingly concerned with non-human actors and entities. The environment, animals, machines, objects, weather, and other non-human beings and things have taken center stage to challenge assumptions about what we have traditionally called "the human." Informed by theoretical approaches like posthumanism, the new materialisms, (including Actor Network Theory, Object-Oriented Ontology, and similar approaches) ecocriticism, and critical animal studies, such scholarship has until now had no separate and identifiable collective home at an academic press. This series will provide that home, publishing work that shares a concern with the non-human in literary and cultural studies. The series invites single-authored books and essay collections that focus primarily on literary texts, but from an interdisciplinary, theoretically-informed perspective; it will include work that crosses geographical and period boundaries. Titles are characterized by dynamic interventions into established subjects and innovative studies on emerging topics.