Play, Creativity, and Social Movements
If I Can't Dance, It’s Not My Revolution 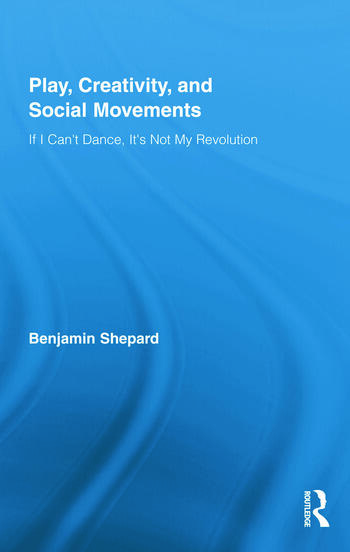 Play, Creativity, and Social Movements: If I Can't Dance, It’s Not My Revolution

As we play, we step away from stark reality to conjure up new possibilities for the present and our common future. Today, a new cohort of social activists are using it to create social change and reinvent democratic social relations. In contrast to work or routine, play must be free. To the extent that it is, it infuses a high-octane burst of innovation into any number of organizational practices and contexts, and invites social actors to participate in a low-threshold, highly democratic process of collaboration, based on pleasure and convivial social relations. Despite the contention that such activities are counterproductive, movements continue to put the right to party on the table as a part of a larger process of social change, as humor and pleasure disrupt monotony, while disarming systems of power.

Through this book, Shepard explores notions of play as a social movement activity, considering some of the meanings, applications and history of the concept in relation to social movement groups ranging from Dada and Surrealism to Situationism, the Yippies to the Young Lords, ACT UP to the Global Justice, anti-gentrification, community and anti-war movements of recent years.

Introduction  1. Play as Prank: From the Yippies to the Young Lords  2. Send in the Clowns: Play, Pleasure and Movements for Sexual Freedom  3. Play as Community Building: From Gardens to Global Peace and Justice  4. Playing in Topsy-Turvery Times: From Carnival to Carnage  5. The Limits of Play: Radical Clowning vs. Tomato Picking.  Conclusion: Methodological Reflections on the Study of Play in Social Movements

Benjamin Shepard, PhD, is an Assistant Professor of Human Service at the New York School of Technology/City University of New York.

- George Katsiaficas, activist and author of The Subversion of Politics: European Autonomous Social Movements and the Decolonization of Everyday Life

is entertaining and inspiring. The book is a glimpse into the funny antics of the past, and the continuing possibilities of playful social protest. Shepard has spent his life as a tireless activist and prolific scholar; his fifth book offers a history of the role of play in social movements rich with all of the passion, dedication and sense of humor of those who play for social justice. Shepard's book is a must read for those who know that 'there is joy in changing the world' (33)."
- Carmen L. McClish , University of the West Indies, St. Augustine "A historically and theoretically sophisticated study of play and humor in the service of political goals... Believing that politics is too funny to be left to the politicians and comedy too serious to be left to the professional funny-men, Benjamin Shepard takes us on a hilarious tour of the streets and parks of America to show us what a little imagination and a outsized sense of fun, mixed in with just enough courage, can do in the struggle for a more human world. Highly recommended!"

- Bertell Ollman, Dept. of Politics, NYU, and author of Dance of the Dialectic

"At a time of social and ecological crisis, the idea of playful protest might seem somewhat irrelevant, yet Shepard's brilliant overview of the ludic spirit of social movements shows us clearly that play is exactly what is needed at times like this. From Dada to Reclaim the Streets, via Act Up and community gardening, every page of this book brings another story of acts of play that enable social movement actors to imagine other worlds through liberating their minds and bodies. Best of all, Play, Creativity, and Social Movements: If I Can't Dance, It's Not My Revolution shows us that when academics leave the safety of their desks for the playground of the streets, the result is not only intelligent, powerful new forms of action, but critique that is alive and kicking."

-John Jordan, art activist and co-author of Paths Through Utopias and We Are Everywhere: The Irresistible Rise of Global Anticapitalism

"This is the book I'd have found as a 23 year old and flipped out to - like George McKay's Party and Protest in 90's Britain, discovering the MC5 or my first RTS protest. His project, exploring the ludic within movements for social change, comes to our contemporary moment. It is a book of theory, criticism, tactics, documentation and most significantly an insider's perspective on some of the most interesting plays for social change engaged within the United States over the last 40 years. I love this book. Herein contains the voices of those who have most inspired and challenged me to scheme then act wildly for a more just world."

"Benjamin Shepard theorizes on play and protest - and he lives it. His real experience with the playful struggle in the streets, whether wearing a red nose or a feather boa, comes through in every chapter of this compelling and provocative book."

"A sojourn into the pages of Play, Creativity, and Social Movements illuminates the continuity of Occupy's struggle with the global cycle of protest against neoliberalism that begun in the 1990s. The book is a must read for anyone trying to understand the more enigmatic aspects of the Occupy movement, including its leaderless structure, squatter sensibility, and eschewal of mainstream political processes; and it is absolutely crucial for those wanting to track the history of anticorporate activism in the U.S. Focused primarily on movement activity in New York, the book provides rich historical accounts of the key political, tactical, and organizational problems and strategies that informed the city's most vibrant and vehement movements for affordable housing, public space, sexual freedom, and fair labor practices over the last couple of decades, against goliath efforts to develop, privatize, and essentially dehumanize urban life." - Heather Gautney, Working USA: The Journal of Labor and Society,