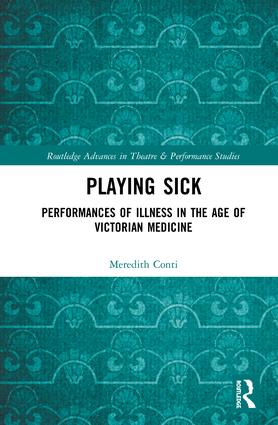 Performances of Illness in the Age of Victorian Medicine, 1st Edition

Few life occurrences shaped individual and collective identities within Victorian-era society as critically as witnessing or suffering from illness. The prevalence of illness narratives within late nineteenth-century popular culture was made manifest on the period’s British and American stages, where theatrical embodiments of illness were indisputable staples of actors’ repertoires.

Playing Sick: Performances of Illness in the Age of Victorian Medicine

reconstructs how actors embodied three of the era’s most provocative illnesses: tuberculosis, drug addiction, and mental illness. In placing performances of illness within wider medicocultural contexts, Meredith Conti analyzes how such depictions confirmed or resisted salient constructions of diseases and the diseased. Conti’s case studies, which range from Eleonora Duse’s portrayal of the consumptive courtesan Marguerite Gautier to Henry Irving’s performance of senile dementia in King Lear, help to illuminate the interdependence of medical science and theatre in constructing nineteenth-century illness narratives. Through reconstructing these performances, Conti isolates from the period’s acting practices a lexicon of embodied illness: a flexible set of physical and vocal techniques that performers employed to theatricalize the sick body. In an age when medical science encouraged a gradual decentering of the patient from their own diagnosis and treatment, late nineteenth-century performances of illness symbolically restored the sick to positions of visibility and consequence.

Performing Camille’s Consumption Before, During, and After the Contagionist Turn

of Sarah Bernhardt and Eleonora Duse

Adaptations of Dr. Jekyll and Mr. Hyde and Sherlock Holmes

Chapter Five The Madwoman in the Theatre: Normalizing the

Meredith Conti is Assistant Professor of Theatre at the University at Buffalo, SUNY, USA. A historian of nineteenth-century theatre and performance, Conti’s work has appeared in Journal of American Drama and Theatre, Journal of Dramatic Theory and Criticism, and Victorian Medicine and Popular Culture (2015).

This series is our home for cutting-edge, upper-level scholarly studies and edited collections. Considering theatre and performance alongside topics such as religion, politics, gender, race, ecology, and the avant-garde, titles are characterized by dynamic interventions into established subjects and innovative studies on emerging topics.