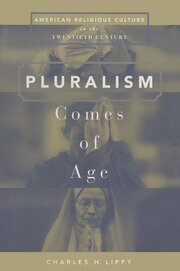 This acclaimed work surveys the varied course of religious life in modern America. Beginning with the close of the Victorian Age, it moves through the shifting power of Protestantism and American Catholicism and into the intense period of immigration and pluralism that has characterized our nation's religious experience.

This masterful work explores the intersection of the worlds of Islam (including South and Southeast Asia, the Middle East and East Africa) and the European economy (particularly the seafaring Portuguese, Dutch, and British) on the eve of the modern world system. It centrally addresses current debates on the nature of the early modern world, and it is likely to become a pillar of the emerging literature that has begun to recast our understanding of the history of Asia. The author underlines the early predominance of Asia in the world economy and demonstrates the long and deep ties between European and Asian economic and military developments.