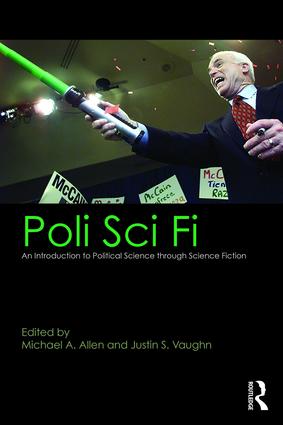 An Introduction to Political Science through Science Fiction, 1st Edition

Poli Sci Fi: An Introduction to Political Science through Science Fiction allows readers, students, and instructors to explore the multiple worlds of science fiction while gaining a firm grasp of core political science concepts. This carefully composed text is comprised of sixteen brief chapters, each of which takes a prominent science fiction film or television episode and uses it to explore fundamental components of political science. The book is designed to serve as a supplemental text for undergraduate political science courses, especially Introduction to Political Science. The structure and content of the volume is shaped around the organization and coverage of several leading texts in this area, and includes major parts devoted to theory and epistemology, political behavior, institutions, identity, states, and inter-state relations. Its emphasis on science fiction—and particularly on popular movies and television programs—speaks to the popularity of the genre as well as the growing understanding that popular culture can be an extraordinarily successful vehicle for communicating difficult yet foundational concepts, especially to introductory level college students.

"Poli Sci Fi: An Introduction to Political Science through Science Fiction is destined to become a classic. The authors artfully present complex political science concepts, such as theory, epistemology and inter-state relations, through a science fiction lens that is sure to generate high student interest and lively class discussion. This novel book covers the core concepts of an introductory course – the perfect way to breathe new life into Politics 101."

is a fun and entertaining book to help students find political meaning in entertainment. The chapters are crisply written and provide provocative questions to stimulate thought and discussion. Students and instructors alike will find it fascinating!"

"Thoughtful and thorough, this text proves that learning about politics through science fiction represents the best of what our discipline offers students and citizens alike. Poli Sci Fi is engaging, practical, and fun. It will be a must-read in courses across the American, comparative, IR and political theory subfields."

"A very helpful supplementary text for introducing undergraduates to political science. Its leveraging of the implied or overt politics in well-known science fiction works will help students to see and understand important concepts and issues in familiar contexts while at the same time avoiding the informational biases and ideological baggage that tend to be tied to specific real-world cases."

Michael A. Allen is Assistant Professor of Political Science at Boise State University.