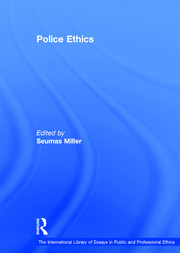 This important volume brings together many of the most influential articles and essays in the emerging field of police ethics, and specifically the philosophical literature on ethical issues that arise in policing. Topics covered include theories of policing; police authority and police discretion; police culture; corruption; deadly force and rights of suspects.

'a welcome contribution to the literature on police ethics and especially the philosophical literature on ethical issues that arise in policing...an important addition ...' Ethical Perspectives