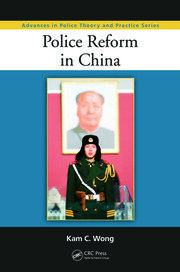 With nearly 20 percent of the world’s population located in China, what happens there is significant to all nations. Sweeping changes have altered the cultural landscape of China, and as opportunities for wealth have grown in recent years, so have opportunities for crime. Police Reform in China provides a rare and insightful glimpse of policing in the midst of such change.

The book begins with a historical account of police reform in the region since 2000. Next, it discusses the difficulties encountered in trying to understand Chinese policing, such as outdated perceptions, misinformation, cultural ignorance, ideological hegemony, and problems with paternalistic attitudes. The book recommends studying China from a local perspective informed by local research and data, suggesting that understanding China requires a cultural shift to the Chinese way of life in "thinking" and, more importantly, "feeling."

The author then summarizes selected policy papers from Gongan Yanjiu, a leading international policy journal. He first documents how the thinking and aspirations of various generations of Chinese leaders from Mao to Deng, and now Jiang and Hu, came to affect Chinese policing in theory and practice. He then addresses the emergence of a police legitimacy crisis as evidenced by the deterioration of public image and rebellions against police authority. Demonstrating how old ideologies are increasingly in conflict with the values and lifestyles of a new mentality, the book discusses steps that can be taken to improve professionalism. The final chapters investigate such problems as abuses of discretion and the improper use of firearms and highlight the importance of understanding the Chinese people, culture, values, and interests in order to truly effectuate successful police reform.

This monograph investigates police reform in the PRC. It is one of the first of its kind to comprehensively discuss how the Chinese Police re-invented itself to be a professional force while facing challenges as well as opportunities accompanied by the great social and economic reform in China since 2000.  The author collected an abundance of up-to-date information— valuable empirical data from various local sources, including newspaper articles, governmental reports, official surveys, and academic self-report studies to support his insightful arguments on police reform in China. This data is very useful in providing a reasonable evaluation of police reform in the Chinese context and building a reliable groundwork for future research in the field. It is a book that anyone studying police in China must read.
—Professor Jianhong Liu; Professor of Criminology of University of Macau (China);
Chair Professor and Dean, School of Law at Southwest University of Political Science and Law (China); and President, Asian Criminological Society

This book provides a rare and insightful glimpse of policing in China in the midst of such change. … Among the book’s most significant contributions are the data sources that it makes accessible to a Western readership. These include publications in professional policing journals, longitudinal data from successive crime victim surveys and surveys of police personnel, and excerpts from conversations in online chat-rooms. The book is richly documented, a resource in its own right. … KC Wong’s intriguing book provides us with a valuable vantage point from which to view the unfolding of this drama.
—Distinguished Professor Peter Grabosky, Australian National University and Vice President, Asian Criminological Society

With rare understanding of Chinese materials, K.C. Wong painstakingly describes efforts to reform the Chinese police during the past decade, courageously exploring sensitive issues of policy and performance. Written in an engagingly personal manner, it is a fundamental book for anyone interested in how modern China manages law enforcement and public order.
—David H. Bayley, Distinguished Professor Emeritus, School of Criminal Justice, State University of New York at Albany

Police Reform in China is a pioneer book. It is the first book to investigate Chinese police reform in a systematic and comprehensive way. The book is researched with access to Ministry of Public Security officers and data, and in consultation with Chinese People’s Public Security University professors and students. Finally, the book is informed by Chinese indigenous theories and supported by local empirical data.

Police Reform in China is a defining book. The book argues for a new approach in the study of Chinese policing. Specifically, it challenges foreign observers to look at Chinese policing from the bottom up and inside out. In so doing, the book contributes to our understanding of Chinese policing in radical and refreshing ways, including findings on the impact of Hu-Wen vs. Deng administration on policing, contradictions between entrenched Lei Feng spirit and emerging post-80 generation aspirations, and how the public think and feel about their police, corruption, abuses, and female policing.

Police Reform in China is a foundational book. The book establishes a necessary foundation for the future development of a Chinese police research and discourse field, by debunking myths, by proposing methods, by offering perspectives, by raising issues, by providing data, by expounding findings, and by prospecting the future.


This book makes two important contributions to the study of policing in China. First, through innovative data-mining methodologies, K. C. Wong brings out the voices and feelings of ordinary police officers and demonstrates the potential of deeper-level research on Chinese policing and criminal justice institutions. Second, K. C. Wong’s work reminds us of the necessity and possibility need to approach Chinese policing and criminal justice from broader political and social perspectives.
—Fu Hualing, Ph.D., Professor of Law and Head, Department of Law, University of Hong Kong

For scholars, practitioners, and policymakers, the evolving societal landscape of modern-day China presents many puzzling and challenging issues of reform and development. In the case of policing and crime control, Dr. Kam Wong has made an invaluable effort by presenting this in-depth and thought-provoking study. Bringing to the fore both a systematic scholarly perspective and a keen sensitivity for important social questions, Dr. Wong not only analyzes ongoing reforms of Chinese policing, but also presents a wealth of ideas that future efforts of police reform must take into account. For anyone interested in the development of policing in China, this landmark work is a must-read.
—Mathieu Deflem, Professor of Sociology, University of South Carolina

"Police Reform in China is part of a series, Advances in Police Theory and Practice, which aims to reach an international audience of academics and practitioners. (...) the book is useful for both communities." -  Manfred Elfstrom, PhD Candidate, Cornell University’s Department of Government.