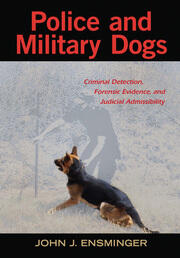 It is essential that those in the criminal justice system understand the tasks that police dogs perform and the evidence that their work produces. Police and Military Dogs: Criminal Detection, Forensic Evidence, and Judicial Admissibility examines the use of police and military dogs for a wide variety of functions and explores canine biology and behavior as it applies to police work.

The book begins with an overview of the changes that have occurred in the field in the past four decades as discoveries have been made about canine capabilities. The author examines how a canine handler’s work with a skilled police dog can

affect the subsequent investigation and prosecution of the crime. He discusses optimal procedures for finding and processing evidence and describes the boundaries of admissibility of evidence produced by police dogs. The book examines the

many diverse detection functions police dogs are being trained to perform, ranging from cadaver detection to the discovery of explosives. It also describes the use of dogs to apprehend criminals and in search and rescue operations.

Written for a wide audience including canine handlers, forensic scientists, attorneys, and the judiciary, this volume covers topics pertinent to all aspects of the police dog in contemporary law enforcement.

John J. Ensminger, a lawyer practicing in New York, has written extensively on tax and financial issues, and more recently on legal, scientific and judicial procedures affecting the functions, rights and protection of specially trained dogs. His most current research focuses on canine scent identification and criminal prosecution applications. His publications include: Service and Therapy Dogs in American Society: Science, Law and the Evolution of Canine Caregivers; Money Laundering, Terrorism, and Financial Institutions; the USA Patriot Act Monitor. Contributions on canine legal issues have appeared in the Journal of Animal Law, GP Solo: ABA General Practice and Tax Notes. He received his BA from the University of California at Berkeley in zoology and marine biology, and earned his JD and LLM degrees from Hastings College of the Law, and New York University School of Law.

John G. Grubbs, president of United States Bomb Dogs, Inc., was a law enforcement officer for 20 years with the Explosives Detection Canine Unit of the U.S. Secret Service, in which capacity he guarded U.S. presidents, vice presidents, and world leaders.

Tadeusz Jezierski, Ph.D., head of the Department of Animal Behavior at the Institute of Genetics and Animal Breeding of the Polish Academy of Science, has published 65 scientific papers, including studies on canine scent detection.

"This book is an outstanding compilation of legal information. Well done. I've been training dogs since 1988 and by far this is the best reference book relating to dog law that I've ever seen. I think every K9 handler should have a copy of this book."
—Jonni Joyce, Nationally Known Master Trainer of Police and Search and Rescue Dogs, author of Jonni Joyce News and Commentary

"A must for all police and military law enforcement personnel and prosecutors. The book illustrates the fundamentals of working dogs on search for a scent that may be looking for a person or drugs. The book is very detailed in explaining the laws of search and seizure and how and what motivates the dog to work. I strongly recommend this book to all law enforcement officers, military police, and all county and state prosecutors. If you want to know how and why a dog works, here is the book. If you are a law enforcement officer you have to read this!"
—Detective Mike Drake, Kentucky State Trooper (Ret.), Pennyrile (Kentucky Regional) Narcotics Task Force, Renowned for Having Dismantled More Than 500 Meth Labs

"The most comprehensive summary of law enforcement K9 legal and scientific information I have ever seen. Every handler, prosecutor, and judge should read it. Providing K9 support in several homicides referenced in the book, it certainly brings to light many aspects of K9 issues of which everyone should be aware. Even with all the other support materials available for law enforcement K9, having faced one of the best K9 defense experts and coming out