Police and Policing in the Twentieth Century 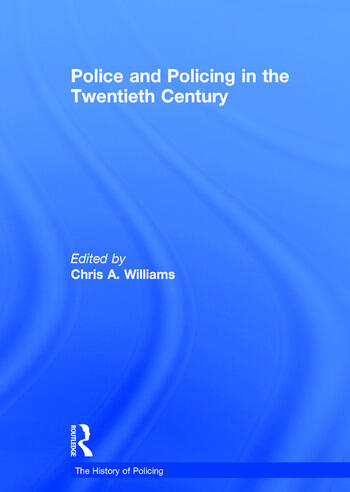 Police and Policing in the Twentieth Century

Between the mid-nineteenth century and the present, the British police gained and to a large extent maintained a reputation as the 'best in the world', largely due to their ability to maintain order through consent rather than coercion. Much recent research, however, has pointed out that the label 'golden age' is an over-simplification of British policing in this period. This volume reprints a series of the most up-to-date and relevant articles which deal with: the ways that police organisation was structured and reformed; the nature of the policing task in this period; who carried this task out (with particular attention to the arrival of policewomen); and some of the crises and ongoing areas of concern (such as the policing of prostitution) which they faced.

Contents: Introduction; Part I How Police Were Organised: Rotten boroughs: the crisis of urban policing and the decline in municipal independence 1914-64, Chris A. Williams; Some reflections on the report of the Royal Commission on the Police, Jenifer Hart; The independence of Chief Constables, Bryan Keith-Lucas. Part II How Technology Changed Policing: 'Mother, what did policemen do when there weren't any motors?' The law, the police and the regulation of motor traffic in England, 1900-1939, Clive Emsley; Traffic, telephones and police boxes: the deterioration of beat policing in Birmingham, Liverpool and Manchester between the World Wars, Joanne Klein; Policing, planning and the regulation of traffic in post-war Leicester, Shane Ewen; Police surveillance and the emergence of CCTV in the 1960s, Chris A. Williams. Part III What Police Did: The 'ghost squad': undercover policing in London, 1945-49, Mark Roodhouse; Crime does not pay. Thinking again about detectives in the first century of the Metropolitan Police, R.M. Morris; The police and the people: gambling in Salford, 1900-1939, Andrew Davies; Containment: managing street prostitution in London 1918-1959, Stefan Anthony Slater; 'The coffee club menace': policing youth, leisure and sexuality in post-war Manchester, Louise A. Jackson. Part IV Who Police Were: A portrait of a novice constable in the London Metropolitan Police c.1900, Haia Shpayer-Makov; Street, beat and respectability: the culture and self-image of the Victorian and Edwardian urban policeman, Mark Clapson and Clive Emsley; A policewife's lot is not a happy one: police wives in the 1930s and 1940s, Barbara Weinberger; 'Walking the streets in a way no decent woman should': women police in World War I, Philippa Levine; Care or control? The Metropolitan Women Police and child welfare, 1919-1969, Louise A. Jackson. Part V Crises of Policing: Blue-collar job, blue-collar career: policemen's perplexing struggle for a voice in Birmingham, Liver

Chris A. Williams is Lecturer in History at The Open University, UK

'... to be welcomed not only by police historians but also by social historians, sociologists, criminologists...Anyone wishing to familiarize themselves with the current state of historical research into twentieth-century policing will do well to start here...This is a valuable collection of essays...' Twentieth Century British History